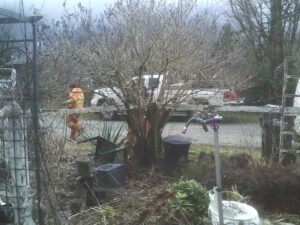 Glad nobody around to see the specifics of our plumbing problem as displayed on the truck.

Well, there are only three houses on the street and the couple next door seem to be away (car missing) and the solo in the 3rd house is rarely glimpsed. It’s not a dead-end street – rather, it’s an elbow, joining two streets which can be accessed directly so why bother. People do occasionally, but it’s pretty quiet.

Later in the day, no way anyone could drive by anyway – the town work crew arrived with several trucks and an excavator and commenced to tear up the street. Well, first they “pruned” my lilac. “Hope you’re not too attached,” supervisor said. “Tear it out and take it away,” I said. But they only chopped down the part on the boulevard side of the fence, and what’s left on my side will probably rise to the challenge. When I moved here and smothered the front lawn and planted flowers, I forgot that lilac (which was THERE and large) is only tolerable if you mow around it regularly. No mowing, and it starts taking over, sending up suckers by the dozens. There are abandoned farms back in Ontario that have turned into acreages of lilac – one town holds a lilac festival in the spring and people tour around. In my own acreage back in Ontario, I was constantly fending it off.

“If the backhoe takes down the old ugly fence, that’s fine too,” I said. But it remains. They dug up around their piece of the pipe that goes through the boulevard to join my pipe with the main. They flushed it out and then the main via a manhole in front of the neighbors. Given that this piece of sewer main serves this street only, I wonder if the silent unseen neighbors were having drainage problems too. I guess I’ll never know. Communication is next to nil.

The good news is that the plumber, after spending several hours with camera and burrowing device, determined that our plumbing was not the problem – and therefore I will be able to submit his bill to the town for reimbursement. Whew.

Also relieved was Reno Rob, whom I’d consulted first. He showed up to help the plumber and explain the plumbing layout in the crawl space. He’d been worried that his work of several years ago (moving my bathroom and kitchen) was the problem.

Actually, the town crew chief told me, the lilac may be the problem, its roots messing with the old pipe at the property edge. Next week they’ll come back (this was Friday afternoon) and replace that feeder and part of the main. “Won’t the lilac give problems again eventually?” I said, still hoping for complete removal. “The new pipe is plastic,” he said (apparently stronger?), “and anyway it’ll be good for 20 years, so it’ll be somebody else’s problem.” He maybe realized that was a bit insensitive, so he added, “And not mine either – but maybe his,” pointing to a relatively young worker.

Anyway, towards dusk, I was informed that all was well for the moment and they’d return next week to wrap it up. In the meantime, “You’re good to go.” Uh-huh.

(Note – I refrained from saying to the plumber, a cheerful fellow as were all of them, “It’s a dirty job, but somebody has to do it,” or even that that was a graphic graphic on the truck. I imagine he’s heard it all.)