“Congressional leaders announced yesterday evening that a stimulus agreement has been reached and will be voted on today. That is welcome, if belated, news for millions of Americans and businesses who have struggled financially under the weight of the coronavirus pandemic. The text of the bill has not been published yet, but based on draft language released yesterday, $600 stimulus checks for eligible Americans and dependents are included as part of the stimulus package.”

The COVID Pandemic Stimulus/Relief Bill that Congress took 8 months to negotiate and pass is an insult to the average American wage earners and taxpayers.

Someone decided that $1,200.00 was simply too much money to give to people whose lives and livelihoods have been disrupted or destroyed by this global health crisis which was made into the worst economic and financial disaster since the Great Depression by the current administration.

About the only thing this package can stimulate is anger and resentment. There’s not enough money in this ‘handout’ to relieve a headache.

Racism and bigotry aside, one of the primary reasons why 74 million people voted for Trump is the arrogance and condescension of folks like Pelosi and McConnell who apparently believe that American citizens should be OK with their lives and livelihoods being valued at about $2.50 per day…. 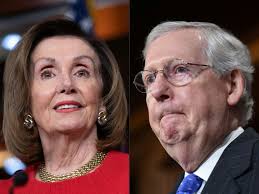 “…equality of citizenship was (is) impossible in a nation where inequality of wealth remained the rule….”

If we don’t straighten this wealth and income disparity shit out, American Democracy won’t be worth shit, and it will be gone by the end of the century….