Post Views: 10
Five Smooth Stones is a 1966 novel by Ann Fairbairn, set in the era of the American civil rights movement. The novel’s African-American protagonist, David Champlain, was born into the poverty and Jim Crow justice of Depression-era New Orleans. Wikipedia 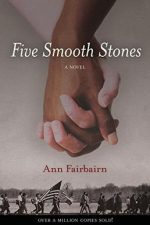 In many respects, the protagonist could have easily been me….

Dorothy Tait, better known by her pen name, Ann Fairbairn, was an American author. She wrote Five Smooth Stones, published in 1966, which was her best-known work. Fairbairn also wrote That Man Cartwright, which was published in 1970.Wikipedia

Fairbairn’s experience managing the national and international tours of jazz clarinetist George Lewis provided the background and impetus for writing this, her first novel.

The book title comes from the biblical story of David and Goliath; chapter 17 verse 40 of the First Book of Samuel says: “Then he [David] took his staff in his hand, chose five smooth stones from the stream, put them in the pouch of his shepherd’s bag and, with his sling in his hand, approached the Philistine [Goliath].”  ——Wikipedia