A Catalogue of Articles of Impeachment Against Trump

2. Violation of the Emoluments Clause

3. Abuse of Power re A Foreign Government

5. Collusion With A Foreign Adversary

9. Violating Immigrants’ Human Rights and Right to Due Process

11. Appointing people who are unfit and unqualified to hold high office.

12. Violation of the Oath of Office:

It would take at least 218 votes in the House of Representatives to pass articles of impeachment and send the process to the Senate.

To date Nancy Peelosi has 150 votes in favor of impeachment. She needs at least 68 more to ensure success in passage.

As it stands she doesn’t have the votes needed to be certain. There are Democrats who are hesitant and unwilling to commit to voting in favor of impeachment.

As Speaker of the House she wants to be sure of the outcome on a measure that she puts to a final vote on the floor of the House.

She knows that should the measure to impeach fail, Trump wins and the 2020 presidential election is all but lost…

The average American voter has proven to be gullible, ignorant, and stupid enough to buy into Trump demagoguery…. 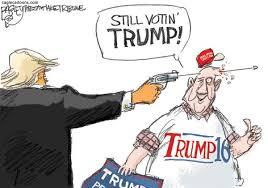 She doesn’t want to take the blame for that….