Amy and I took our first real trip out of quarantine, and after the pandemic, over the July fourth holiday.  In our journey from central Ohio to Northern Vermont, I thought I would get a good sample of America’s mood as it reopens.  Without being able, or willing to travel for nearly the last year and a half, my window on the country has been network and cable news.  And, given its polarized presentation, one is left with frustration or cognitive dissonance regarding ‘those people’, in ‘those places’, no matter who or where ‘they’ are.  Sitting in front of my television, I sensed a Dis-United States, struggling to take rational steps to end the pandemic, and restore a functioning government.

Even so, hitting the road was somewhat liberating.  We had been planning for a month or so to join our friends on a camping trip on an island in Lake Champlain.  Last summer it was difficult to see what the future would look like, and we stayed close to home.  Our biggest risk with outside contact was having contractors in our home, while having some remodeling done.  When we would be able to leave, and continue normal social activities was unclear.  Our theater season was postponed.  Amy’s CSO choral rehearsals and performances had been suspended.  Our summer music festival was suspended.  We saw far more people through Zoom than in person.

We took a 750 mile route through Ohio, Pennsylvania, New York, and Vermont on the way up.  Our destination was roughly 40 miles south of Montreal, in that country to the north.  (I think it is Mexico, or Portugal or something). On the way back, we decided to take a 900 mile route through Massachusetts.  Both routes took 14 hours.  The route up took us off of the interstate, and through interesting little towns like Whitehall New York, the birthplace of the US Navy, and just a few miles from places like Fort Ticonderoga.

Our trip was adorned with beautiful greenery.  The marshes and fields, and forests, and farm land were abundantly supplied with rain.  The second crop of corn was thigh high, with not a brown leaf to be seen.  The news of the western states was all about record heat, fires, and drought.  In our area, there was none of that.  We have had plenty of water, and lots of rain.  Lots, and lots, and lots of rain.  Driving on some of those state roads in Vermont, divided only by a yellow line, the spray from the tires of semi-trucks reduced visibility significantly.  And those drivers drove those rolling, curving, roads like there was no chance of sliding off of them.  And while the historical sites and the quaintness of those New York and Vermont towns made it well worth it, we decided to take the longer interstate route on the way back.

Driving on the interstate makes interaction with strangers rather limited.  It was basically limited to stopping for gas, and the customary simple interactions of holding doors, standing in lines, or the occasional questions and comments about the dogs.  Eye contact and head nods are up from 6 months ago, but region to region, state to state, there was really not much difference.

Arriving in Vermont provided the first real noticeable difference in the way people conducted themselves.  Coincidentally, and maybe not coincidentally, Vermont has done quite well in the management of the pandemic.  Its level of vaccination has exceeded 80% for some time.  Statistically it is a safer environment, and the relaxed interaction of strangers showed it.  When we first arrived at Kill Kare state park, where my friend would pick us up with his boat, another camper saw us get out of our car and came over with her dog, to “meet” our dogs.  This sort of casual social action hasn’t really become common yet in Ohio, but was comfortably easy there.  That friendliness increased once we got across to our island.  The greetings between strangers was consistent and friendly.  They were noticeably warmer than what we had left in Ohio.  The most noticeable occurred in the pitch darkness of nighttime.  Our restroom facilities were .15 miles from our tent.  It was about a 3 minute walk down a trail, and would be nearly impossible without a flashlight.  The thing I found interesting was that people walking along in the complete darkness, with only the shine of one another’s flashlights visible, would greet one another as though the sun were shining.  If ever there were a time where one could avoid speaking, this would be it, but the greetings and acknowledgment continued.  The greetings lacked the tinge of nervousness or suspicion that have been present in our virus stressed world.  The island was blissfully relaxed.

I’ll spare you further details of how different it was, other than to say that it was so different that it does not serve to explain how we are coming out of the pandemic.  Vermont was too different, and I suspect has always been too different through the pandemic, to offer a meaningful comparison, or trend analysis.  It is off the chart, emotionally, and physically, relative to the Midwest.

So, I am 866 words into all of that and I have not even touched on what was, by far, the best part of the trip.  The best part was seeing my old friends, Ethan and Sue-Ni.  Ethan is an old USMC buddy of mine, and Sue is his wife.  They met when Ethan and I were stationed together in Atlanta, and now they have 3 adult sons.  The sons are all quite remarkable, and the middle one especially so.  We may be hearing more from him sometime soon.  He has recently taken a job in a think tank in Washington DC.  But, this isn’t about them.

Ethan and Sue are extraordinary people.  And though my experience is mainly with Ethan, for future reference, when I refer to one of them as extraordinary, I mean both of them, although some incidents involve only one of them.  They are just one of those married couples for whom their qualities seem inextricable from one another.

Ethan and Sue-Ni have created an antiquarian business, Broad Street Books, in their town of Branchville New Jersey.  The stories of how this whole operation works are absolutely fascinating.  They are not exactly Indiana Jones, but they are more like him than they are not.  Book selling is a positively fascinating business model, and their particular approach would make one hell of a movie.  Much of what they do is accomplished online, and they have been quite successful, but believe me when I say that their success is not the best part.  The best part has been their adventure, and the fascinating people they have interacted with on their journey.

Leaving the Marines, Ethan did a number of things.  And to the benefit of Amy and me, much of that life experience came to our camping trip.  Ethan and Sue are expert campers, and made our transition very easy.  Ridiculously easy.  One of the things Ethan did after the Marines was work in his uncle’s catering business.  He basically tuned it from a surviving business into a profoundly successful one.  Being an hour from New York City, their business was essentially events in New York City, so the environment was fertile and sophisticated.

Now, Art  Stone and I exchanged comments about camping trips we were planning before Amy and I took off for Vermont.  Art mentioned that he would be doing some “glamping.”  We didn’t exchange the details.  Well, although we slept in a tent, we shared the most extraordinary meals on this trip.  Every night was grilled steak, BBQ ribs, or shrimp, or fire roasted vegetables.  We had fresh guacamole, fresh fruit, water, juice and sparkling water.  (Who takes sparking water while camping)?  Amy and I took our favorite pea berry coffee grounds, a couple of bottles of wine, and George Clooney’s Mezcal tequila…which is awesome.  Our lunches were the best tuna salad sandwiches I have ever had, steak sandwiches, leftover ribs, awesome salads, and fruit.  Ethan has also been camping on this island since he was a boy.  By his estimation, he has been there over 50 times, so we had a guided tour of the island, and fascinating stories from the 70s to present.

So, Art, we went to Vermont intending to camp.  Thanks to our friends, we became accidental glampers. 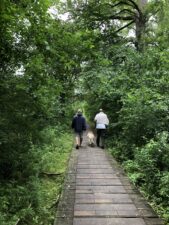