Bipartisanship Through the Looking Glass

For Mitch McConnell and the rest of the Congressional Republicans, ‘Bipartisanship’ has become a euphemism for delay and, along with the filibuster, has become a primary or principle dilatory tactic of the Republican Party in running out the ‘legislative clock’ on what they perceive to be unwanted and undesirable legislation, thereby ensuring the failure of certain measures to gain congressional approval and passage.

Legislative bipartisanship is little more than a rabbit hole the exploration of which will accomplish nothing more than the waste of the time remaining on the legislative clock that will run out by the end of July.

The response of the Democratic Party should be to immediately abandon the quest for bipartisan support for its legislative agenda and deliver legislative activity through the reconciliation process on those budget measures that have wide public support. 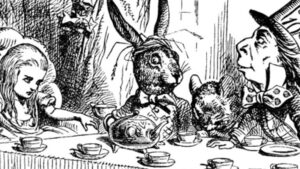 Merrick Garland and the DOJ must find or develop constitutionally creative proactive means to thwart the attempts of state legislatures controlled by Republicans to suppress the casting of votes by black and brown people, and control and corrupt the process of counting ballots in order to ensure their desired results….