This is absolutely not a ‘Beethoven was black’ post: 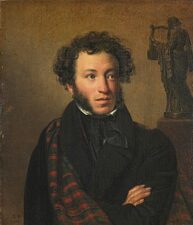 Alexander Sergeyevich Pushkin was a Russian poet, playwright, and novelist of the Romantic era. He is considered by many to be the greatest Russian poet and the founder of modern Russian literature. Pushkin was born into Russian nobility in Moscow….

He is considered by many to be the greatest Russian poet and the founder of modern Russian literature.

Pushkin was born into the Russian nobility in Moscow. His father, Sergey Lvovich Pushkin, belonged to an old noble family. His great-grandfather was Central-African-born general Abram Petrovich Gannibal.

He published his first poem at the age of 15, and was widely recognized by the literary establishment by the time of his graduation from the Tsarskoye Selo Lyceum.

Upon graduation from the Lycée, Pushkin recited his controversial poem “Ode to Liberty”, one of several that led to his exile by Tsar Alexander I. While under the strict surveillance of the Tsar’s political police and unable to publish, Pushkin wrote his most famous play, the drama ‘Boris Godunov’.

Pushkin was fatally wounded in a duel with his wife’s alleged lover and her sister’s husband.
Georges-Charles de Heeckeren d’Anthès, also known as Dantes-Gekkern, a French officer serving with the Chevalier Guard Regiment. 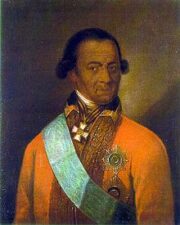 Pushkin’s great-grandfather, Abram Petrovich Gannibal (1696–1781), was a Russian military engineer, major-general, and nobleman of sub-Saharan African origin. He was born in an area bordering Lake Chad in what is now known as Cameroon.

Kidnapped as a child by Ottomans, Gannibal was traded to Russia and presented as a gift to Peter the Great, where he was freed, adopted and raised in the Emperor’s court household as his godson.

Gannibal eventually rose to become a prominent member of the imperial court in the reign of Peter’s daughter Elizabeth.

After education in France as a military engineer, Gannibal became governor of Reval and eventually Général en Chef (the third most senior army rank) in charge of the building of sea forts and canals in Russia.

He had 11 children, most of whom were members of the Russian nobility one of whom was the mother of Puskins grandfather, Sergey Lvovich Pushkin, thus making Gannibal maternal great-grandfather of the author and poet Alexander Pushkin, the other ‘Black Russian’.

“For Russians, Alexander Pushkin inhabits a space beyond taste, where nationalism has given subjective art the patina of fact. He is the undisputed father of their literature in the way Shakespeare is for Brits. Given the insular nature of contemporary Russian politics, it might be hard to imagine that the creator of Eugene Onegin was not only a proponent of multiculturalism and global exchange but an example of it: Pushkin was mixed race, and proud of his African ancestry.”

How Alexander Pushkin Was Inspired By His African Heritage