I graduated from the University of Connecticut School of Law in June of 1971.

Two years earlier, Jazz musicians Les McCann and Eddie Harris recorded and released an album which included a live recording of ‘Compared to What’ which is a prime example of grievance and protest put to music.

It was a critically acclaimed and successful vocal/instrumental composition that was quite popular at the beginning of the new decade.

“Compared to What” is a protest song, composed and with lyrics by Gene McDaniels.[2] It was recorded by Roberta Flack in February 1969, but became better known following a performance by Les McCann (piano and vocals) and Eddie Harris (tenor saxophone) at the Montreux Jazz Festival in June of that year, which appeared as the opening track on their album Swiss Movement.[2] The album was certified Gold in sales in the United States.[3] The song has been recorded by more than 270 artists, including Ray Charles[4] and Brian Auger.”

Perhaps you’ve heard it before:

There’s not too much here that isn’t apt and applicable today, some 50+ years after it’s release…

Am I really that old?

‘Never’ is such an ugly word as ‘Compared to What?’ 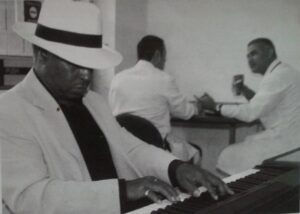