Last night’s episode of Gotham on FOX introduced a new villain into the show, while the show’s most popular villain, the Penguin, found himself looking death right in the eye. The episode began with a man strapped into a chair, being hung from the top of building. The man that had captured him and hung him there slung a noose around his neck and hung the man in the chair, who we later find out has a phobia of heights. This would lead to a series of similar murders that spark an investigation for Detectives Gordon and Bullock.

Mob boss Sal Maroni receives a phone call from the fleeing Fish Mooney in regards to his right hand man, Cobblepot. She informs him that Cobblepot is secretly working for his enemy, Falcone, and has been tricking him this entire time into trusting him.

Maroni and Penguin happened to be together at the moment of this phone calls, prompting Maroni to invite Cobblepot to take a road trip with him to take care of some business. The two leave immediately as Maroni makes it seem like an urgent matter that needs to be taken care of right away. The two arrive later in upstate, away from the commotion of Gotham City. Cobblepot and Maroni begin a meal of oatmeal and coffee, while Maroni begins to question Cobblepot on his past. Maroni begins to transition the conversation to the point where the two are swapping secrets. Maroni calls out Cobblepot on the fact that Fish Mooney is alive and had phoned him to let him know that Cobblepot was going behind his back and working for Falcone. With Cobblepot’s plan exposed, he pulls a gun on Maroni, which is actually Maroni’s gun that he snatched out of his bag when he wasn’t looking.

He fires the gun multiple times into Maroni, but to his surprise, the gun is loaded with blanks, which does nothing but upset Maroni, who proceeds to beat Cobblepot into an unconscious state. Maroni takes the knocked out Cobblepot to a nearby junkyard and forces him into a car which is set to be crushed, promising to send his remains to Falcone. Cobblepot begs for his life from Maroni, trying to give him information about Falcone, while the car is beginning to be crushed. Maroni has none of it and heads towards his car to leave the site. As a last resort, Cobblepot calls Duffy, the man operating the machinery that is crushing him. He uses Falcone’s name and threatens Duffy and his family’s lives if he does not stop the machine. Scared for his own life, Duffy does as he is told and then leaves the scene altogether. By the time Maroni realizes what occurred, he is too late and Cobblepot has escaped the car and is no where to be seen. 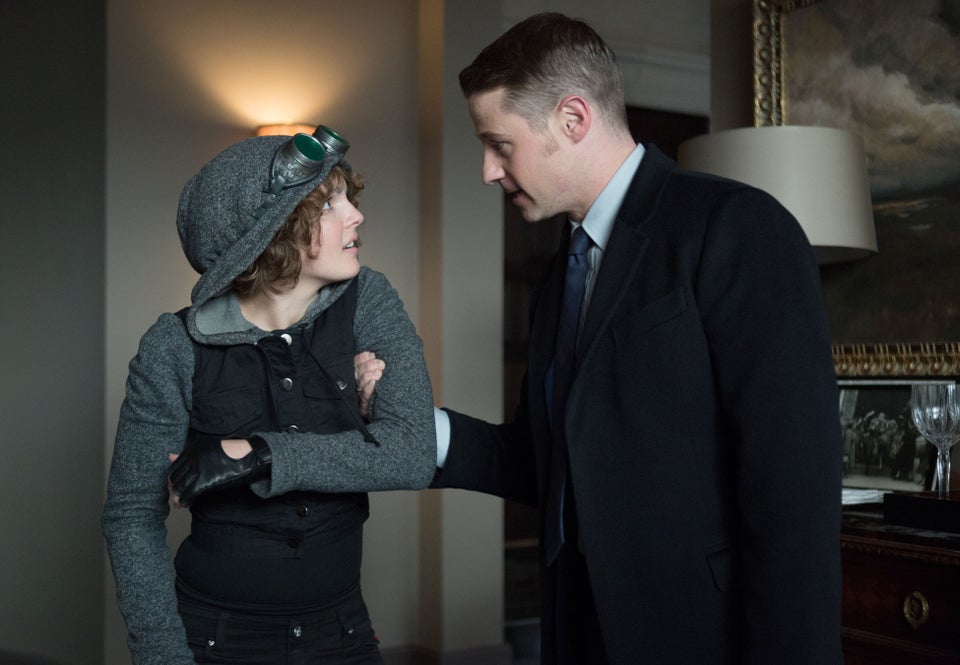 Back in Gotham City, Gordon finally returns to his apartment and finds the juvenile Selena Kyle staying in his place while he was out. She breaks the news to him about her lying on the Wayne murder case just to stay for free. This prompts Gordon to visit Bruce, something he has not done in quite some time. Bruce, naturally upset about the situation, tells Gordon that he is off the case since he has not been able to make any progress, and will be taking matters into his own hands. Bruce storms out of the room, leaving Gordon with no choice but to leave.

While investigating the initial murder that opened the episode, Bullock is introduced to Scottie Mullens, a friend of the victim. Through her, Bullock learns that the victim had a phobia of heights, and also that there is a group that meets weekly to discuss their phobias. Bullock takes a liking to Mullens and offers to drop by the class to learn a little more, really just wanting to spend some more time with Mullens. After rescuing another man with a phobia of pigs from being killed while in a room full of pigs, Bullock decides that the murderer is likely attending the class and knows exactly how to torture the victims because of the knowledge gained.

While in the class, an anonymous man begins to tell of his phobia of failure. The story becomes too intense and he leaves in the middle of the discussion, causing Mullens to chase after him. After quite some time has passed and Mullens has still not returned, Bullock connects the dots and realizes that the man that stormed out is the killer and that he has tricked Mullens into following him. Knowing her phobia of swimming pools and a childhood story regarding a specific pool, Gordon and Bullock know exactly where to go to find Mullens. The two arrive at the scene just in time, as Mullens had been thrown into the swimming pool tied up. Gordon chases after the unknown man, but after an extensive chase, the man escapes from Gordon and is not to be found.

Gordon had given the case file for this murderer to his love interest, Dr. Lisa Thompkins. Thompkins finds that the adrenal gland was missing from the body. The adrenal gland is the gland in the human body that is responsible for releasing chemicals while experiencing fear. The two figure that the murderer is trying to capture this gland while it is filled with the “fear” chemical that is released, but they are still not sure as to why exactly he would do that. The episode ends with a scene of Fish Mooney on a freighter that is leaving Gotham City behind. Pirates hijack the freighter, killing the captain in the process. A pirate sees Mooney and charges at her, while she is growling and charges towards the pirate, leaving the audience completely puzzled as to what is going on.

One interesting tidbit from this episode is that the title is “The Fearsome Dr. Crane,” yet Dr. Crane is never referenced by name in the episode. He is actually the man that commits the murders and runs out of the phobia therapy group. It is unclear why the writers decided to leave his name out of the actual episode, leaving only the die hard fans of the franchise to know that this man is Dr. Crane. Many questions remain unanswered, mainly the status of Cobblepot who is stranded in the middle of nowhere and, of course, the peculiar scene with Fish Mooney that ended the episode. Gotham will be back next Monday night on FOX.