Last night’s episode of Gotham saw some major happenings for many of the show’s main characters. Detective Gordon continues to do things his way regardless of who he may offend. In this most recent episode his true colors show through brighter than ever, as does his genuine desire to stop crime in the city. Freshly captured Fish Mooney escapes an almost certain death, making an attempt to fight her way back into her seized club. Cobblepot, the Penguin, celebrates with his mother the opening of this same night club that he now controls. Meanwhile, Bruce Wayne is crushed as he takes a step back in his search for his parents’ murderer.

Synopsis: The episode begins with Detectives Gordon and Bullock investigation the homicide of a local drug dealer. Arnold Flass, a detective in the Narcotics field, is also working the case and provides some insight into the happenings of the drug gangs around town. Gordon meets Leon Winkler, a night janitor at the scene who claims to have witnessed the murder. Gordon invites Winkler back to the police station to help create a sketch of the killer.

Gordon returns to the interrogation room to find Winkler dead from a wound in his back. It is discovered that the weapon was an ice pick, and likely the same one that was used in the original homicide case that was being investigated. This causes Gordon to believe that the murders were done by a cop on the inside, as there was no other way for Winkler to have been attacked. This is an idea that disturbs those involved, with police chief Essen demanding Gordon not get involved in this case any further, knowing full well that the rest of the officers would be livid if Gordon accused one of their own of committing these murders. Gordon finds fellow Detective Delaware in the garage of the police station. Delaware acts suspiciously and tries to escape, but gives in to Gordon who promptly arrests him after finding the same drugs in his car that were found on the body of the murdered drug dealer. Gordon drags Delaware into the holding cell, clearly making a statement to all police officers that were watching. Chief Essen releases Delaware as Detective Flass notifies her that Delaware was working on the inside as part of an undercover job in the drug ring. Flass warns that Gordon could have jeopardized the entire investigation due to his move with Delaware. Gordon loses the case at this point as it is handed over to Flass to continue.

Meanwhile, Fish Mooney is transported to a man named Bob, who is charged by Falcone with torturing Mooney. Mooney survives the torture – including near suffocation- long enough for her main henchman, Butch, to rescue her by attacking Bob and returning Mooney to safety. Mooney awakens at a hotel with Butch where he advises her to leave Gotham for a while to keep a low profile with Falcone likely hunting for her. Mooney refuses to leave until she “cuts the Penguin’s throat.”

During this same time, Gordon pays a visit to Cobblepot at his new club, seeking his help for any information he can provide about the drug connections between the homicide cases. Cobblepot vows to help his good “friend” and indeed sends one of his people out to torture Delaware’s wife, causing him to spill the whole story. Thanks to Cobblepot, Gordon ends up in possession of the ice pick that was used on both murders and is able to trace everything back to Detective Flass. With the evidence in hand, as requested, Gordon and Chief Essen place Flass under arrest for both murders. With Gordon’s full investigation, he appears to have earned some of his respect back with his fellow officers. 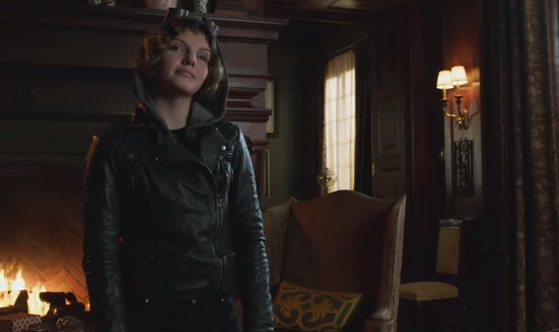 Bruce Wayne and his butler, Alfred, have returned from a trip to Switzerland, and Bruce instructs Alfred to drive him all around the city in search for his new friend, Selena Kyle. Selena witnessed his parents’ murder, causing Bruce to truly cherish having Selena around. He is unable to locate Selena, but ends up running into a mutual friend, Ivy. Ivy agrees to forward Bruce’s message to Selena in exchange for twenty dollars. Selena receives the message and pays Bruce a visit. Bruce presents her with a gift and offers for her to stay in his mansion during the investigation. Selena gets upset and confesses to Bruce that she lied about witnessing the murder just to get out of juvenile camp. She gives him the gift back and leaves Bruce alone in shock at her confession. It is back to the drawing board for this case, considering Bruce has not heard from Detective Gordon in quite some time.

Mooney visits Cobblepot and his new club, catching him off guard. He has sent everyone home, including his mother, and now has no one to aid in his defense. She enters with a baseball bat in hand, and Cobblepot instantly realizes he is in danger as it is just him against Mooney and Butch. As he is on his knees, begging for mercy, some of Falcone’s gang burst into the club, scaring off Mooney, as she is able to escape due to Butch sacrificing himself. Mooney decides that she will leave Gotham for a short time to allow for some of the drama to die down. Bullock is the one to see her off and they share a kiss, revealing that their relationship is much more than it appeared to be.

The episode closes with Delaware tracking down Gordon in an alleyway and begging for him to keep his family out of the investigation surrounding the drug ring in which he was involved.

Looking to next week: Bruce Wayne will finally call out Detective Gordon for making no progress in the investigation for his parents’ murder. Dr. Jonathan Crane is introduced into the story. Fish Mooney will reveal a secret to Maroni regarding Cobblepot, causing him to question his loyalty.