I Look White To Many. I’m Black. This Is What White People Say To Me.

I am a Black woman who for most of my life has often been mistaken for white. And I’m here to tell you that for four decades white people have openly, even sometimes proudly, expressed their racism to me, usually with a wink and a smile, all while thinking I’m white too.

The incidents pile up, year after year — at a friend’s wedding, when I met a new roommate, at the grocery store, while riding in a taxi, and during innumerable other events from daily life.

As the nation begins, finally, to focus on the social injustice that takes place across this country — from the South where I grew up to the North where I’ve lived for the past 22 years ― I feel the collective pain. Even as a very fair-skinned Black woman with green eyes and light brown hair, I, too, have experienced racism. But I’ve also been a fly on the wall when white people didn’t know anyone of color was looking or listening.

Imagine taking a car service to Newark airport for a business trip, and the driver, a retired white police officer, tells you and your white boss that were he still a cop, he would pull over the Black driver stopped next to us, just because he is Black. Or the white taxi driver who, during a business trip in the South, freely shares broad generalizations about groups of people, looking to either find a kindred soul or spark a debate with a Northerner — one who he thought was white.

Put yourself in my shoes when you move to Reston, Virginia, temporarily while you wait for your apartment to become available in Alexandria, and your new roommate, a young, white male, one who you thought was kind and warm, warns you to be careful of venturing into Washington, D.C., because every time he goes there he gets “robbed by Black people.”

“Really, every time?” I questioned.

Think how upsetting it would be to join your boyfriend at the time (who also looks all white but is biracial) at his friend’s wedding and one of the guests states he doesn’t want his daughter going to a particular concert because there will “be way too many Black people.”

There’s the executive who asks, “Is this the ethnic Cheryl?” when I wear my hair curly rather than straight. What about the random stranger in the grocery store who can’t understand the texture of my son’s hair and repeatedly asks questions about my background while putting her hands all over my son’s head.

Imagine the district retail manager who balks at hiring a Black model for a fashion show I’m in charge of planning, despite the store having a diverse customer base. “She is just not right for this crowd, if you know what I mean.” I knew. But she didn’t know — that maybe I’m not right for her crowd, either.

Then there are the many women who, once they realize I’m Black, want me to help them “understand Black people” because they really haven’t had any exposure; as if we are some type of rare species and I’m their spokesmodel.

Some instances I hope are not coming from a place of hate, but rather incorrect assumptions based on too little information and a too-fast glimpse at my face. The medical records that say white instead of Black. The doctor who doesn’t understand why I’m asking questions related to genetic conditions that are more common to particular ethnic groups. The employee file that doesn’t count me as one of their diverse hires. The committee that doesn’t realize they have a person of color represented. The performer who asks why don’t we have any Black people in the audience tonight — while looking directly at me, seated right in front.

And yet, it still hurts.

Whether in my personal or professional life — rather ironic, since I work in the field of philanthropy, diversity, equity and inclusion — this is the type of fear, ignorance and lack of self-awareness that I have witnessed and experienced for over 40 years. I’m 51, and I’m exhausted.

I’m tired of weighing, each time, whether I am going to say something in response to these hateful statements—because I must continue to advocate for what is right — or if I am going to walk away because I’m just too damn tired. Or stay silent, while gaining more insight into what really is on the minds of some when they don’t think a Black person is listening?

But do I really need any more insight? Any more proof of what some will say or do if they think no one’s watching? Does it really matter if I’m living in the South or now in the North? In a city or suburbs? At work or running errands around town? At a social event or on public transportation? When it’s clear from my own experiences and the indifferent attitude toward the suffering of others —spotlighted these last months, but enacted for years, decades, centuries before — that some of those same people don’t even care when the eyes of the world are on them.

Yes, I’m exhausted. But I must act.

When I hear racist comments clearly meant for white ears only, I have to stay, I have to stand, I have to speak up, challenge, identify myself, educate. I must walk with my fair-minded brothers and sisters of every color to call out racism whenever I see it and do my part to make this a more just world.

Cheryl Green Rosario is working on a memoir about her experiences as a light-skinned Black woman often mistaken for white. 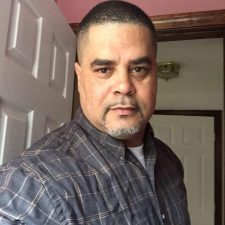 I know he has faced the same scenarios and issues as she has and trust that he has handled the situations and circumstances with the same grace, strength, courage, and conviction as she…