Indifference: Trump is Counting on It

There are people whose lives are unaffected by the decisions and choices the can have an impact on the lives of those who are susceptible and vulnerable.

The luxury of callous indifference goes to those whose lives are unscathed and unchanged by the tides and winds of electoral politics….

They live above the fray, above the oratory clamor of campaigns and candidates.

These are the folks who really don’t give a shit about anything or anyone but themselves because, as they see it, they don’t have to….

They insist that nothing that they do or say will matter anyway, so they think; “why bother?”

He is counting on indifference to suppress the vote sufficiently enough to cause him to win without a majority or a plurality. 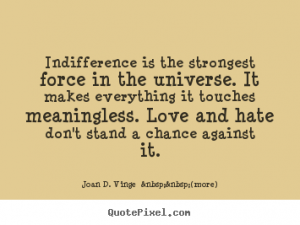