If you’ve read any of my posts featuring Ms. Miryam Gumdrops, my six-year-old fighter-biter tabby cat, you cannot have left without knowing how thoroughly I Love, Adore, Am Devoted To, Am Mesmerised By, this delightfully bright, deliciously naughty fighter-biter tabby-scamp. 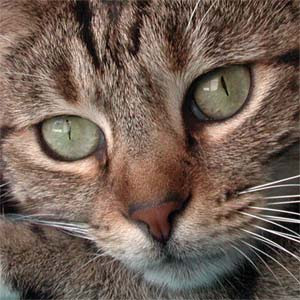 I was thinking on Gumdrops-Love this week as I saw some PETA (People for The Ethical Treatment of Animals) emails sent my way from a well-meaning acquaintance. While I do not hunt, do not pick wings off flies, and while I brake for crocodiles and skunks, as the org’s philosophy and program are so completely divorced from how I regard animals vis-a-vis people, I tend not to read much of what he sends. Yet the guy is sincere, so his unread, trash-binned mail did, nonetheless, in part move me to consider more fundamentally than I have in a while my sense of human-animal relationships.

It put me in mind of Torah, the choices and the prohibitions:

. if we do we must not do it out of anything close to a sense that we and animals are on a par, are equals, because

. Whether or not we regard people and animals as endowed with souls; even if we do not believe we (and/or they) are so endowed, we have ranges of intellect and emotion that are broader, deeper, more complex.

This is not to suggest that animals do not think and feel. They do.

But except for some, Cowboys fans, for example, more fit for kennel-life than roaming among Free Peoples, our intellects and emotions are of a different order. Better ones. I’ve no issue saying that, and I reject wholly Animals R People 2 bumper stickers, posters, lapel pins, birthday cakes, and seating them at the Thanksgiving table..

And I’m pleased to have it affirmed that Torah does, as well. My bet’s that the ancient Hebrew Clans’ Laws regarding what and how they ate represents a not wholly satisfying compromise between those who argued that vegetarianism is the way to go and those who just couldn’t get past the sensory delights of barbecue.

The not-so-satisfying compromise demands that if we kill animals, we must do it in as humane a manner as possible, that we may not be gluttons, and that we must be in no other ways wasteful or dismissive of animals. When Torah says, for example, that we must not “seethe a calf in its mother’s milk”, whatever else the verse means, it’s a serious reminder that higher-order animal life is sentient and that in the relationship between people and even the animals we eat, we must demonstrate some sensitivity and respect for, Torah teaches, the same Mover created us both.

Here’s the bottom line. When we say Amimals Are People, Too!, we cannot escape the truth that we are also saying that we are animals, not ‘human animals’, but creatures endowed without much, if anything, more compelling than what animals have. It is saying that we do not have the capacity for Moral Intelligence, however imperfect or perfectable. And yet we know that we do.

If we say and really believe that animals are like us and we are like them, we will be far more likely create of ourselves a species whose go-to is violence and oppression and intra-group forced domination far, far more than ours already is now.

Reconsider the last lines of the Orwell. We may not regard these words in horror now, but if we behaved consistently as if we and animals were truly the same, we’d have to frame and hang the words on increasingly cracking walls.

“Twelve voices were shouting in anger, and they were all alike. No question, now, what had happened to the faces of the pigs. The creatures outside looked from pig to man, and from man to pig, and from pig to man again; but already it was impossible to say which was which.”

I know, clear-as-a-bell, my fighter-biter, bright and deliciously naughty-naughty Ms. Miryam Gumdrops doesn’t want to live that way. Neither do I.