The terrorist next door

I’m in Cincinnati for a funeral. That was Wednesday. We’re helping my mother in law with some stuff. We’re staying in the Hampton Inn Kenwood, on the right in the photo.

The building on the left is the Cincinnati FBI office.

Yesterday morning we left for my mother in law’s and noticed TV crews setting up in front of the FBI office for some sort of  interview. We were supposed to take Interstate 71 north for an appointment but we’d rescheduled that, which is good because 71 was badly tied up from a police chase.

Some guy who’d been at the Capitol Jan. 6 decided to attack the FBI office because of the search at Mar A Lago. He showed up with body armor and armed and tried to break into the FBI office but security there is really good. He didn’t make it, set off an alarm, and fled when agents started coming out. He jumped into his white Crown Vic and fled, police in pursuit. He went up the interstate, took an exit, ended up n a cornfield and instead of surrendering raised a firearm at the police – and I think got off a shot – who promptly shot him to death.

At about 5:00 we were preparing to go to my mother in law’s for dinner. I was pulling out of the parking lot when a news vehicle sped in, followed by a sheriff’s vehicle. They went near the fence dividing the hotel’s grounds from that of the FBI office, jumped out and set up a shot. 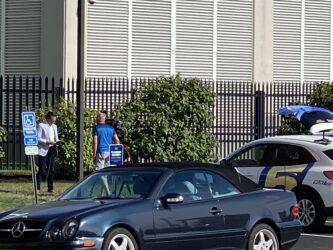 I picked up my wife from the front entrance and as we drove off a bunch of people were setting up news broadcasts in front of the FBI office. I guess these people needed to go live for the 5:00 news.

I didn’t hear anything in the morning when it happened. I was downstairs getting breakfast. I don’t think any shots were fired at the FBI building. I don’t know if we would have heard shots or not. Wrong side of the building, though we were certainly close.

It’s still weird to be that close, though.