Trump: The ‘Clown Prince’ Who Would Be King

Donald Trump doesn’t see himself as President of the United States.

In fact, the closest he has been to reality in this entire political phenomenon and debacle, was his quite legitimate expectation of defeat.

He rightfully expected to lose the election. He didn’t plan on winning, which is why, to this day, he has no meaningful or substantive plan for running the country…

On election night 2016,  when everyone was referring to him as the President-Elect, I vowed to never ever use his name and the word President in the same sentence…

I found it surprisingly easyfor me  to keep that vow, while continuously writing about the disasters and atrocities that are the benchmarks of the current administration.

In a comment on a recent post here, my friend and colleague, Koshersalaami, suggested that we the media take the posture that Trump is a joke and openly laugh at him in print and video reports of his antics and shenanigans.

However, I would take that suggestion a step or two further. I believe that the time has come for the media, and the rest of us, to stop referring to him as ‘the President’.

The President and the Presidency are not laughing matters. They are no joke.

However, Donald Trump is the ultimate buffoon. He is an absolute clown…And a supremely dangerous one at that… 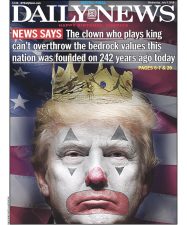