The Subtle and Unintended Racism in Media

In my salad days, when I heard, during a discussion or debate, someone quote Descartes, attempting to flex and brandish his /her ‘intellectual’ muscle, I would add: “ut sunt, sic etiam quld”. I would only recite the translation when asked, which occurred invariably:

Thus, I would weaponize my often superior knowledge and rhetorical skills in the cause of self-defense.

In most cases, the silent sound of stunned disbelief and shocked incredulity was quite gratifying.

Today, when I ‘push back’ against overt racism or a subtle or nuanced exercise in ‘white privilege’ or a manifestation of latent racism in a comment or post, the sound of silence in reaction or response is as gratifying as it ever was…

Under such circumstances, It is quite often that I am labeled a “bully”, a “reverse racist” the “black know-it-all” and an “elitist” amongst other disrespectful and insulting, vile and obscene epithets, appellations, and invectives…

It really doesn’t take much to get some white people to stop hiding behind cute sounding screen names and misappropriated avatars to become disjointed enough to attempt to drop the ‘n’ word along with an f-bomb or two….

Here are a few of the names I can recall from my time in the OS ‘Snark Tank’:

The amount and degree of psycho- babble and pseudo intellectual bullshit that these folks would exchange amongst themselves re black people, the black experience, race, racism, and racists was staggering, almost beyond belief and comprehension.

When I complained and protested the lack of adherence to scholarly or academic rules of discourse And engagement, I was told to ‘do my own research’….

…And then, one of them reminded me that this, after all, was “social media”. 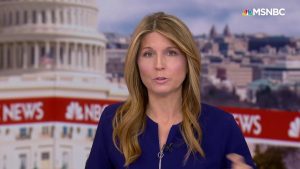 As Nicole Wallace, a white MSNBC anchor and commentator, viewed the scenario of one the memorial services held for George Floyd, in speaking of his family as they were being escorted to their places, she quite casually asked:

“Where does the strength, courage, dignity,and grace come from?”

I instantly realized that the so-called ‘progressive’ commentator had blown a huge opportunity to bring the message home to the millions of viewers who were looking on at that time….

She, and her on air colleagues, blew it because they are no less racist than any other so- called ‘non-racist’ white people that I might encounter on the street or on the internet…

The problem, of course, is that MSNBC isn’t ‘social media’. It is the premier cable news voice of progressive perspective, spin, and slant in this country….

I can guarantee you that few, if any, caught the subtle hint and unintended manifestation of racism and ‘white privilege’…

There are those who would accuse me of being a racist for catching and commenting about it….

But then, no one mentions or talks about the young women who video- recorded the murder of George Floyd either…..

The commentator missed the moment and opportunity of her lifetime to inject and interject the salient reason and purpose of broadcasting such proceedings and goings on.

Instead she blithely asked:

“Where does the strength, courage, dignity,and grace come from?”

The only real and correct response to such an inane and racist inquiry is:

“It comes from our humanity!”