In a comment stream on a recent Koshersalaami post, Koshersalaami addressed a concern I raised about selective enforcement of the rules here:

“…there are only three people who post that actively on the site, and one of them is Robish who generally doesn’t comment on anyone else’s posts. So in terms of full participation there are basically two people responsible for most of what happens here and you’re one of them. What the Hell is anyone going to do?”

Later in the interaction and exchange, I said:

“Eliminating and eradicating racism has as much to do with addressing the unintentional and subconscious manifestations as it does with the easy and obvious big issues and targets such as the Confederate Flag in state capitols and taking a knee at football games.

It’s the little things that have the greatest impact on the nature and quality of an individual’s life….”

Is it just me, or has the BindleSnitch correctness crew deleted ‘Reggie Williams’ and everything appertaining thereto? 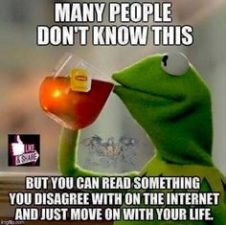