White people go through life with the benefit of the assumption of equality.

White folks can walk through life backwards and blindfolded in the belief that they have the right to succeed, despite shortcomings and deficiencies that would virtually destroy the hopes and aspirations of any person of color.

Black people go through life having to ‘prove’ their equality in virtually every instance of encounters with and within white society and culture.

How does one go about proving that he/she has the right to exist and live as a human being?

When a white person sees another white person, the reflexive assumption is that the other person is a social, political, moral, and ethical equal until he/she proves or manifests otherwise.

When a white person sees a black person the very opposite is the case and the unconscious ‘What are you doing here?’ or the ‘You don’t belong here.’ reflex syndrome kicks in.

That’s when the micro aggressions occur and the defensive survival tactics and techniques are reflexively summoned in response.

How far ahead am I supposed to get when I must constantly prove that I have an equal right to use the toilet or the lunch room, or get a raise, or compete for advancement, etc?

How much intellectual, psychological, and emotional energy do you think that might take on a minute to minute basis?

For the vast majority of white people, the white supremacy and white privilege that are baked into the fabric of America’s social, political, and economic and systems, eliminates the requirement to know what black people must learn in order to simply subsist and survive. 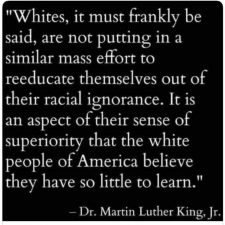