Black History Month: Scoop There It Is!

Cralle was born in Florida Wesley Chapel in 1866 just after the end of the American Civil War (1861–1865).[1][2] He attended local schools and worked with his father in the carpentry trade as a young man, becoming interested in mechanics. He was sent to Washington, D.C. where he attended Wayland Seminary,[1] one of a number of schools founded by the American Baptist Home Mission Society to help educate African-Americans after the Civil War.

He then settled in Pittsburgh, Pennsylvania where he first served as a porter in a drug store and at a hotel.[1] Alfred noticed that servers at the hotel had trouble with ice cream sticking to serving spoons, and he developed an ice cream scoop.[3] 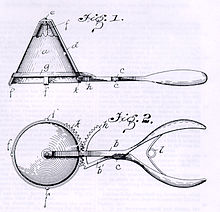 On 10 June 1896, Alfred applied for a patent on his invention. He was awarded patent 576,395 on 2 February 1897.[4] The patented “Ice Cream Mold and Disher,” was an ice cream scoop with a built-in scraper to allow for one-handed operation.[5][6] Alfred’s functional design is reflected in modern ice cream scoops.[7]

He later become a general manager for the Afro-American Financial, Accumulating, Merchandise and Business association.[1]

Cralle died from tuberculosis on May 6, 1919, in Pittsburgh, Pennsylvania.[8]”

Alfred L. Cralle lives in this 21st TV commercial which is not only one of the best spot promotions on air today, it is also a continuing  celebration of his 19th century invention….