The Prescience of Abraham Lincoln as a Young Man

In the mid to late 1830s America experienced an outbreak of violent vigilantism during which white and black criminal defendants and suspects were taken out and summarily lynched by unruly mobs.

Lincoln chose this topic for his speech at the Lyceum in Springfield, Illinois as the context for his defense of the rule of law and the protection of political institutions.

Though his purpose was healing and reflection, this speech is often cited as the most significant call to and for national unity since the Declaration of Independence.

Lincoln’s 2nd Inaugural Address, given in the wake of the Civil War, possessed many of the same qualities attributable to his address at Gettysburg….

Both of these orations were given by a mature and weather worn, perhaps even weary, Abraham Lincoln, soon to become a final casualty of a war that he may have foreseen in his youth approximately a quarter century before the first shots of were fired in the war between the States which occurred during his fateful presidency….

Lincoln was 28 years old at the time he gave his ‘Lyceum Speech’.

“The Perpetuation of Our Political Institutions:
Address Before the Young Men’s Lyceum of Springfield, Illinois
January 27, 1838

“If destruction be our lot, we must ourselves be its author and finisher. As a nation of freemen, we must live through all time, or die by suicide.

“…there is, even now, something of ill-omen, amongst us. I mean the increasing disregard for law which pervades the country; the growing disposition to substitute the wild and furious passions, in lieu of the sober judgment of Courts; and the worse than savage mobs, for the executive ministers of justice. This disposition is awfully fearful in any community; and that it now exists in ours, though grating to our feelings to admit, it would be a violation of truth, and an insult to our intelligence, to deny.

“I know the American People are much attached to their Government;–I know they would suffer much for its sake;–I know they would endure evils long and patiently, before they would ever think of exchanging it for another. Yet, notwithstanding all this, if the laws be continually despised and disregarded, if their rights to be secure in their persons and property, are held by no better tenure than the caprice of a mob, the alienation of their affections from the Government is the natural consequence; and to that, sooner or later, it must come.

“Here then, is one point at which danger may be expected.

“The question recurs, “how shall we fortify against it?” The answer is simple. Let every American, every lover of liberty, every well wisher to his posterity, swear by the blood of the Revolution, never to violate in the least particular, the laws of the country; and never to tolerate their violation by others. As the patriots of seventy-six did to the support of the Declaration of Independence, so to the support of the Constitution and Laws, let every American pledge his life, his property, and his sacred honor;–let every man remember that to violate the law, is to trample on the blood of his father, and to tear the character of his own, and his children’s liberty. Let reverence for the laws, be breathed by every American mother, to the lisping babe, that prattles on her lap–let it be taught in schools, in seminaries, and in colleges; let it be written in Primers, spelling books, and in Almanacs;–let it be preached from the pulpit, proclaimed in legislative halls, and enforced in courts of justice. And, in short, let it become the political religion of the nation; and let the old and the young, the rich and the poor, the grave and the gay, of all sexes and tongues, and colors and conditions, sacrifice unceasingly upon its altars.

“While ever a state of feeling, such as this, shall universally, or even, very generally prevail throughout the nation, vain will be every effort, and fruitless every attempt, to subvert our national freedom.

“There is no grievance that is a fit object of redress by mob law.

But, it may be asked, why suppose danger to our political institutions? Have we not preserved them for more than fifty years? And why may we not for fifty times as long?

“We hope there is no sufficient reason. We hope all dangers may be overcome; but to conclude that no danger may ever arise, would itself be extremely dangerous. There are now, and will hereafter be, many causes, dangerous in their tendency, which have not existed heretofore; and which are not too insignificant to merit attention.

“Is it unreasonable then to expect, that some man possessed of the loftiest genius, coupled with ambition sufficient to push it to its utmost stretch, will at some time, spring up among us? And when such a one does, it will require the people to be united with each other, attached to the government and laws, and generally intelligent, to successfully frustrate his designs.

“Distinction will be his paramount object, and although he would as willingly, perhaps more so, acquire it by doing good as harm; yet, that opportunity being past, and nothing left to be done in the way of building up, he would set boldly to the task of pulling down.

Here, then, is a probable case, highly dangerous, and such a one as could not have well existed heretofore.”

Is it possible that, at the age of 28, Abraham Lincoln foresaw both the Civil War AND Donald Trump? 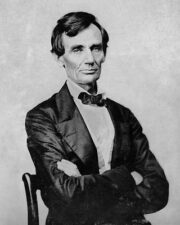 You may read the full and complete text at:

Lincoln’s writings are in the public domain.