In one of the most crucial Senate votes during his presidency, the Senate voted yesterday by a narrow 62 to 37 margin to uphold President Barack Obama’s veto of the controversial Keystone XL Pipeline bill, but the fate of the pipeline bill is not nearly as important as what the vote itself indicates for the immediate future of American politics. A two-thirds majority of the members who are present and voting is required to override a presidential veto, which means that, with all of the senators present and voting, the Republicans would need 67 votes in the Senate to override a presidential veto. With Senate Republicans currently holding only 54 seats in the Upper Chamber, the vote to sustain the veto is a harbinger of things to come over the next two years, as the Republican majority struggles to wear down the stubborn Democratic minority who, right now, hold the balance of power in the Senate, giving the embattled Democratic president a virtually bulletproof veto power.

All of the Senate’s 54 Republicans voted together to override the Keystone Pipeline veto, along with eight Democrats who sided with the Republican majority, including (1) Michael Bennet of Colorado, (2) Tom Carper of Delaware, (3) Bob Casey of Pennsylvania, (4) Heidi Heitkamp of North Dakota, (5) Joe Manchin of West Virginia, (6) Claire McCaskill of Missouri, (7) Jon Tester of Montana, and (8) Mark Warner of Virginia. A ninth Democrat, the Keystone Pipeline bill co-sponsor, Joe Donnelly of Indiana (9), would have voted to override the veto, but he elected to attend the funeral of University of Notre Dame’s President Emeritus, Reverend Theodore Hesburgh, along with Presidents Obama and Carter.

Donnelly was not present for the vote because he left for Indiana Tuesday evening, and the Republican leadership of the Senate did not decide to bring the Veto Override measure up for a vote until Wednesday morning, when Donnelly was already in Indiana and unable to return in time for the vote. Nevertheless, as a co-sponsor of the original pipeline bill, he was well aware of the Republican leadership’s decision to bring the measure to the floor for a vote. His decision to attend the funeral, rather than cast a vote to support his own legislation, indicates how well the Republicans in the Senate were able to count the number of Democrats who would side with them. Had the vote been closer, Donnelly might have decided to stay in Washington instead of returning to Indiana.

Battle Lines are Being Drawn

The battle lines have now been drawn for the next 20 months, with the Democrats holding a razor-thin, four vote margin to uphold future presidential vetoes for the remainder of Obama’s term in office. That four vote margin is also all that stands between Obama and a bill of impeachment, which requires the same two-thirds majority as a veto override. In subsequent veto confrontations over the next 20 months, the cast of characters are not likely to change very much, but each one will be a test of the viability of an attempt to impeach the 44th president of the United States.

As perhaps the third most conservative member of the Democratic Senate Caucus (which includes independents King, of Maine, and Sanders, of Vermont) behind West Virginia’s Joe Manchin and North Dakota’s Heidi Heitkamp, Donnelly remains virtually unique among the members of the 114th Senate. This chart, from Govtrack.us, illustrates that he is both far to the right of rank and file Democrats, and one of the least influential Democrats in the Senate. (Editor’s note: Govtrack’s graphic charts change on a daily basis as new votes are cast in Congress, so today’s chart might look quite different from the one below.) 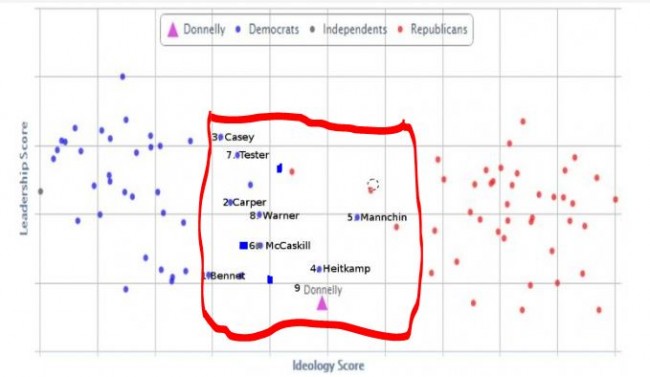 Together with the eight other Red Dog Democrats in the Red Box, above, Donnelly, et al, comprise the right wing of the Democratic party and represent the balance of power in upcoming veto battles, because they put the Republicans within shouting distance of overturning subsequent vetoes. However, in order to overturn a veto, the Republicans will have to convert the members of the Democratic party’s Fearsome Foursome.

The Fearsome Foursome are the four other Blue Dots in the Red Box, more conservative than the rest of the party, but nevertheless the heart of the Democratic party’s batting order. Led by Democratic Minority Leader Harry Reid of Nevada (obscured in this version of the chart), the foursome includes Bill Nelson of Florida, independent Angus King of Maine, and Tin Kaine of Virginia, none of whom are likely to wander into the Republican camp. 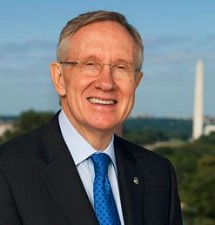 Reid, the former majority leader, is not going anywhere, nor is he likely to turn his coat and vote against Obama on any of the matters that might come up during the next 20 months. Having just won reelection to his seat, Reid, at 75, is not likely to run again in 2020, so he has nothing to fear from the electorate but, as the titular head of the Democratic Congressional Delegation, he has the power to make life miserable for Democrats who refuse to toe the party line. (Editor’s Note: Reid chose not to run for re-election in 2016 and retired from the Senate in 2017.) 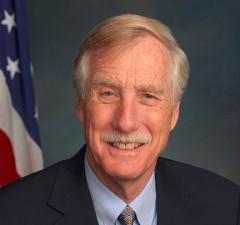 Angus King, Maine’s independent senator and a former Governor of the state, is one of two independents who caucus with the Democratic party. Unlike the other independent, the unabashedly left-wing Bernie Sander, King is more of a “let’s get it done” moderate, but he will likely stay the course because, though he does not run as a Democrat, he is more closely aligned with their values. (Editor’s Note: King won re-election in 2o16. He has announced that this will be his last term in the Senate.) 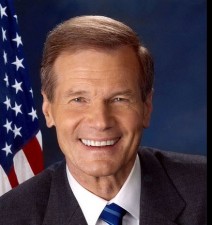 Bill Nelson, the popular Florida Democrat, sailed to an easy victory over Republican Connie Mack III, who failed in his 2012 attempt to win back the seat he gave up in 2001. With three years left on the current lease on his Senate seat, Nelson, 72, is not likely to run again in 2018 but, if he does run again, he will win in a walk. It would take a heavyweight Republican to unseat him, along with the long coat tails of a successful Republican presidential nominee. (Editor’s Note:  Nelson lost his re-election bid in 2016 to Florida’s Republican Governor, Rick Scott.) 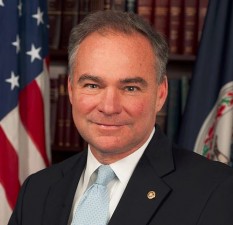 Despite his moderate voting record, Virginia Senator Tim Kaine is wrapped up with the Democratic party. Considered for the vice presidency in 2008 before losing out to Joe Biden, Kaine served as Chairman of the Democratic Party from 2009 to 2011 before going on to win his first term in the U.S. Senate in 2012. At 57, he is the youngest of the Fearsome Foursome, has the least seniority, and therefore has the greatest need for the support of his Democratic peers in the Senate. (Editor’s Note: Kaine lost his bid for Vice President in 2016 on the Democratic ticket, running with presidential candidate Hillary Clinton. He retained his seat in the Senate.)

Given the recent Democratic tilt of the electorate in Virginia, it may be a foregone conclusion that, if he were to vote to override an Obama veto, he might very well be gone the next time the voters get a chance to discard him. With fellow Virginian Democrat Mark Warner already having gone over to the dark side, it is likely that Kaine would bear the brunt of voter disapproval should he become the vote that overturns a popular Obama veto. Of course, if he fails support a veto reversal on an unpopular bill, he could still feel the wrath of the voters from the other side of the aisle.

A Nation In Gridlock

This puts the Republican party in a very difficult position because they would need to convert all four members of the Fearsome Foursome, along with the nine Red Dog Democrats in that Red Box, in order to override a veto….or sustain a Bill of Impeachment if the House Republicans were to send one up to them. The chances of converting Reid, Nelson, Kaine and King to their cause closely resemble those of a snowball in hell. They could, however, set their sights on four other senators to make up their 67 votes, but the chances of finding four weak sisters further to the left of those in the Red Box group would have to be categorized as very wishful thinking.

That puts the country in the rather uncomfortable position of having to live through the next 20 months with a gridlocked Congress unable to say yes to anything and virtually forced, therefore, to say no to everything. As strange as it seems, however, this apparent gridlock could actually work for the Democrats because it gives Obama and the Democratic members of the Senate, the room to do some serious horsetrading between now and 2016. If the Republicans want to go into the 2016 contest with some notches on their gun butts representing successful legislative initiatives, they may have to engage in a serious give and take with the President they dislike so candidly in order to get those things done.

President Obama knows this, just as he knows he will have to veto more bills over the next 20 months as the Republicans try to undo his legislative agenda. For the past four years, since the Republicans took control of the House in 2010, House Speaker John Boehner (R- OH) has had more direct power over the nation’s legislative agenda than the chief executive, or anyone else in Congress for that matter. It is one of the oddities of the American political system that, by virtue of having lost control of the Senate to the Republican party in November, President Obama may now have the power to bring the Republicans to heel, putting the political shoe on the other foot.

Six years into his presidency, Barack Obama has vetoed just three bills put before him. The last time an American president vetoed so few bills during his term of office was back in 1881, when James A. Garfield vetoed none, but that was because Garfield only served 200 days as president before succumbing to injuries inflicted on him during an assassination attempt. Before that, you have to go back to 1853 and Millard Fillmore to find a president who smacked down Congress less that Barack Obama has. Having picked his veto targets carefully so far, Obama will be forced to pick future veto targets even more carefully because, should he lose any of those reconsideration votes, it might very trigger an impeachment feeding frenzy among Congressional Republicans.

(Editor’s Note:  As this article was being revised, we learned that Harry Reid had managed to slide a funding resolution through Congress to keep the Department of Homeland Security in business which appears to be indicative of a new Republican willingness to go along with the Democrats on some things.)