Our position on advertising is simple: we accept paid advertising but we keep a tight rein on what gets advertised on our site and how the advertisements are displayed. We don’t accept advertising from dating sites and we screen our advertisers for scams and con games. We don’t allow pop ups or self-initiating videos.

We also have technology that defeats ad blockers so that some of our advertising (but not all of it) remains visible even when the visitor has an ad blocker turned on.

We also hide some of our best content from people who are using ad blockers but we think that’s a lot better than hiding ALL of our content behind a pay wall and charging people for the right to read our articles.

Advertising is Essential to the Maintenance of a Free Press 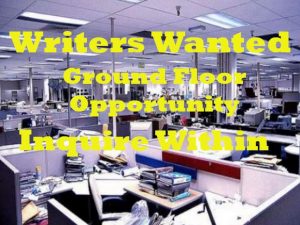 Take BindleSnitch, for example. We could have sought out venture capitalists and explained that we were going into competition with Facebook, Google, Twitter, Medium, Slate, and a few dozen other well established content distributors. The would have laughed us out of the conference room. (We don’t blame them. Competing against multi-billion dollar companies is a fool’s errand if there ever was one.)

Let’s assume, for a moment, that BindleSnitch attracts some really important writers, including  investigative journalists who need outlets for their work, making it important for BindleSnitch to stay in business. That takes money. Not being independently wealthy (any more at least), paid advertising is the only mechanism available to us to generate the working capital we need to stay in business.

Do you care? Probably not, unless you are an author trying to reach an audience, or a reader who is tired of the pabulum the mainstream media keep pumping out.

If you read our Writers Wanted page or The BindleSnitch Marketing Plan,  you would come away with an understanding of the business concepts behind the BindleSnitch initiative  but, alas, we still need advertising money to prime the pump and fuel the engine.

For those of you who aren’t going to read that much, we just want you to know that BindleSnitch is a collectively owned publishing platform, and that we are operating in a cooperative, profit-sharing business model. We have no investors or shareholders to kowtow to. 100% of our revenue comes from advertising. 100% of our net profits go to our contributors. There are no pay walls between our readers and our content and we do not allow obnoxious advertising on our website.

Is Advertising Bad for You?

But advertising is bad, right?  Or is it? That’s a much more important question than it might appear to be because advertising is a core requirement for a viable news distribution system.

The idea that advertising is bad is an old one…and it has merit. Advertising manipulates your consciousness by making you want things that you didn’t previously want because you didn’t know they even existed. We are all aware of the car-buying pressure that television advertising exerts on us, making us less contented with our current rides and encouraging us to want the newest bells and whistles that the newest models have been encrusted with.

Advertising also affects how we relate to the opposite gender (and, sometimes, the same gender) by projecting unrealistic standards for the male and female forms that real people rarely live up to…and soon age out of when they do. Therefore, it might be alleged that advertising affects our expectations for relationships and marriages.

In politics, advertising is one of the three factors that control the outcomes of elections, the others being public relations and, now, social media. Advertising dollars spent sometimes (but not always) equates to the success or failure of a political campaign but beware: the quality of the advertising also affects its effect on a campaign, so that sometimes spending fewer dollars can have a bigger effect,

Advertising makes you paranoid. Don’t think so? Spend a day watching television and simply count up the number of commercials for diseases and conditions.  You might think the advertisements are actually for medications but, until you scare people into being concerned about a certain set of symptoms, you have no way to encourage them to seek out the drugs you’re selling. Advertising sells diseases, not cures.

Advertising also affects how drugs perform by creating and managing the consumer’s expectations for the drugs they are taking. Diet pills are a prime example of this positive reinforcement pattern, along with “male enhancement” products.

On the other hand, advertising also alerts consumers to products and services they might very well need and might not know about without having seen an advertisement for the product or service. That being true (and you know from your own experience that it is) we have to consider advertising a mixed blessing at best.

Newspapers, magazines and television broadcasts have been supported by advertising revenues ever since these forms of communication first appeared.  The first newspaper advertisement in the United States – for an estate on Oyster Bay – appeared in the Boston Newsletter in 1704.  By 1729, Benjamin Franklin was accepting advertising for The Pennsylvania Gazette because he wasn’t making enough money on subscriptions alone. In that respect, then, we can conclude that advertising helped foster the American revolution. (Franklin knew a thing or two about business; among many other things, he also inventing franchising.)

The first radio advertisement aired in 1922 on WEAF in New York City for another real estate venture, The Hawthorne Court Apartments in the Jackson Heights section of Queens. The first television commercial aired on July 1, 1941 during a baseball game in which the Brooklyn Dodgers were hosting the Philadelphia Phillies at Ebbetts Field.  The advertiser was the Bulova Watch Company.

So, advertising has been around for just about as long as mass media.  There has never really been a mass market publication that didn’t carry advertising. With very rare exceptions  (such as WEEI in New York City), television and radio were always supported by advertising until the advent of  the Public Broadcasting System  and subscription supported operations such as HBO.

Lately, however, more and more publishing ventures (including radio, television and online services) are putting themselves behind pay walls in order to make ends meet because advertising revenues have fallen off precipitously over the past two decades.

The list goes on and on, but it’s no secret that these older forms of communication are in great danger…and so is the society that relies upon them for truthful communications.

More and more mainstream publications and content publishers are  putting their digital editions behind a pay wall, charging for information that until recently was being provided free of charge. The Boston Globe, Financial Times (of London), The National Business Review, The New York Times, The Wall Street Journal, Wired, Fortune, The Los Angeles Times, Time Magazine, The Atlantic,  and New Yorker are just some of the publications that now hide behind pay walls. (The list keeps changing as websites turn their pay walls off and on again.)

While such publications have a perfect right to charge for their content, they are also putting their content beyond the reach of a significant percentage of consumers, which encourages them to frequent less reputable outlets in their searches for information.

In most cases, they will allow you read three or four articles each month before they close the curtain.  In some cases, they give you a choice: turn off your adblocker or buy a subscription.

We have a better idea

Our better idea is to hide some of our best content from people who use ad blockers on our website. This bonus content ranges from fiction to poetry and artwork, as well as in-depth reporting you won’t see anywhere else.

We’re pretty sure that our original content will remain original because our pages are all copy protected. You simply cannot copy anything that appears on BindleSnitch. (Of course, if you are a programmer, you know ways to get around our content blocker…but it ain’t easy.)

We believe that, because of our collectively owned and operated structure and low overhead, we can afford to pay contributors quite well on the advertising revenue we expect to receive. If we’re wrong, we will declare our experiment a failure and go back to writing for a living. No one likes beating a dead horse.

We are also here to demonstrate a viable model for credible information distribution, including how to beat the ad blockers without dumping bad advertising on our readers. Wish us luck.

BindleSnitch editors is a dummy account used to test website functionality. Any editor can use BindleSnitch Editors.