Algis Kemezys is one of those rare human beings who creates new things out of old cloth.  A multimedia artist originally from Canada, Kemezys – on very little money – travels around the world recording both vanishing worlds before they disappear and imaginary worlds that he cobbles together from found objects through the medium of photography.

Often – but not often enough – Kemezys gathers together collections of his usual photographic effects and produces a video composed of individual stills in a form that used to be called a “slide-tape” presentation, but that was back when producers used multiple slide projectors controlled by a primitive computerized controller that used punched paper tapes to create the effects while prerecorded music was added from a reel-to-reel tape deck. 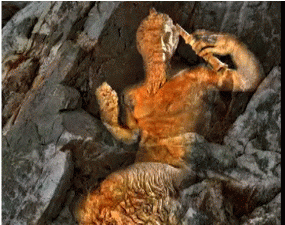 Today, Kemezys, working alone,  can achieve the same effects that once took a dozen highly trained audio-visual workers hours to set up.  Just getting the slide projectors focussed properly and “timed in” was a major achievement…and yet this technology was used to make presentations at Fortune 500 company meetings, political conventions, and World’s Fairs and Olympic events.

Kemezys makes good use of the new and better technology, working alone to create slide show programs with much higher quality than the old fashioned slide-tape system.

Long fascinated with stone as a medium, Kemezys sometimes constructs “found art” sculptures made by balancing locally gathered stones together to create amazing edifices without so much as a drop of glue to keep them together. In an online interview, Kemezys explained that the transitory nature of these rock constructs was part of the beauty of such objects, with their ephemeral nature contrasting with the enduring qualities of raw stone.

His latest work in this vein is a video presentation of his photographs called “Born in Stone,” which consists of photographs of ancient Greek sculpture embedded in sacred rock from holy places in Greece. Part of this collection will be exhibited at The National Archaeological Museum in Athens, Greece, Opening January,19th 2015, if you happen to be in the neighborhood.

When audiences look at Kemezys’ photographs, they are often convinced that the stone sculptures are actually cut from the rock that surrounds them, but that’s part of Kemezys’ special techniques. He sometimes takes ordinary Polaroid photographs and does things to them that turn them into original works of art.  They have to be seen to be believed. (You can see his “stone carvings” now in the video below.)

More often than not, though, Kemezys injects himself directly into the material he is solemnifying with his art, becoming part of the story he is recording, which isn’t very journalistic, but is nevertheless very effective. One of this most amazing presentations was done in precisely that manner, but it  had nothing to do with stone. Instead, in 2010, he journeyed to India (Kemezys spends much of his time living and traveling in Greece, Turkey, India and the Middle East) to witness and record the 2010 Maha Kumbh Mela gathering in Haridwar, India, which took place on the banks of the Ganges River.

More than 100 million are thought to have taken part in that event, the largest peaceful gathering the world has ever 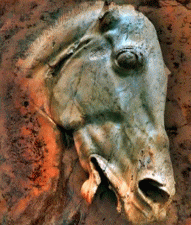 known.  The ancient Hindu ritual of bathing in the Ganges and other Indian rivers (the event takes place every three years at one of four locations, so that each location becomes host to another gathering every 12 years) combined with the visiting with saints and gurus dates back to at least 645 C.E., but there is anecdotal evidence to suggest that the gatherings have occurred for thousands of years before that.

At these gatherings, Kemezys encounters and photographs sacred sadhus – people who, in the West, might be called gurus or fakirs – who gather together every three years for a collective cleansing practice. the people at any two gatherings are never exactly the same folks, so each gathering is unique. The pictures are charming, because Kemezys seems to have an uncanny knack for putting people at ease, a vital skill for a candid photographer, someone who doesn’t work in a studio with professional models.  You can see some of these still photographs on his Open Salon Blog, Here. If you wander around his Open Salon blog you will find a lot more.  Open Salon is a closed site, so you can’t comment on his work there unless you are already a member, but you can make comments here.  We’ll make sure he sees them

In response to a Facebook inquiry, Algis Kemezys provided the following explanation of the process through which these images were made: “The technique is quite simple. I take a photograph of a sculpture and combine it with a photograph of stone features from Holy Places in Greece. The merger is complete with no cropping of either image. The fit has to be magical. I photograph the rock images when the rock calls out to me and then imagine the images I have made of the sculpture and compose from memory. Based on those pre-visualizations I photograph the rock in hopes that it will merge. I make many Hybrid sandwiches to get my desired final effect.”

The 56 year-old Kemezys has quite a pedigree as a photographer, having worked with M.I.T.’s famous staff photographer Robert Lyon, eventually replacing the ill and aging Lyons as chief assistant to the legendary Berenice Abbott, she who discovered French Mega-photographer Eugene Atget while working for ManRay in Paris in the late twenties. Kemezys helped to organize Abbott’s historic large format photographs from the 1920s and 1930s for a retrospective at the Witkin Gallery New York, before branching out into his own fine art photographic career.

(Editor’s note: This article was amended to replace the Whitney Museum with the Witlkin Gallery.- AMM)