My mother has been active lately on Ancestry.com. They take DNA samples and they find people related to you among their users. My mother recently found some cousins, not all that distant, I think either second cousins or second cousins once removed. Because her paternal grandmother didn’t get along with everyone and her father was an only child (as is she), my mother didn’t grow up spending time with her father’s side of the family.

Aside from knowing some relatives in common, there’s another interesting benefit of such contacts: photographs. The one above came into my mother’s possession (electronically) a few days ago. She’d never seen it. I think she was told it was taken in 1910 in Jamaica Bay, Queens. I think it may be a bit more recent, like maybe 1912. In any case, certainly over a century old.

I knew three people in the photograph.

You might think Sure, the three kids. But no. I knew the three people on the left. The boy is my grandfather, whom I mostly take after. The other two are his parents.

As an aside, those were not the only great grandparents I knew. Somewhere there is a home movie of my first birthday party. In that apartment in Corona, Queens, were ten of my genetic ancestors. An eleventh was alive but not there – he barely spoke English and I was not his first great-grandchild like I was for all my mother’s grandparents. I have a slightly different relationship with ancestry than most people. All three of them died within about ten years, I think more like eight or nine, the last – my grandfather, as you’d expect – when I was 22 or maybe just 23.

My grandfather was a radio amateur, a ham radio operator. That was his version of what would now be a chatroom. If you opened the closet in his ham shack, the room he set up in, on the door you’d see this mirror: 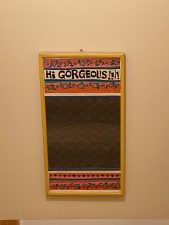 My great grandparents lived upstairs from their son and daughter in law. When I first came to the US from the Panama Canal Zone where I was born (Dad was in the Army and stationed there), we lived across the street from them for a little over four years. When I knew my great grandfather, he was usually sitting in a chair smoking a pipe. Actually, this chair 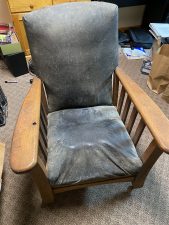 There’s a button on the arm I could never manage to push down. I didn’t know what it was for. As it turns out, this is an early recliner, and the button lets you go back and, if you’re already back, it brings the back up. He had a stool for a footrest I think but there is also a footrest that physically pulls out of the front of the chair and under it is a sort of basket you could leave a newspaper in.  It’s in the basement, it needs to be cleaned up, and I didn’t bother straightening around it for the picture. I got up and took pictures of both objects while I was writing this. They’re just here.

There were a few other photos in this batch. One contains my great grandfather with two of his brothers and his father, smoking and a little obscured by the smoke. This was after all a casual occasion at the beach. I didn’t include those. No reason to. It’s a very different look at my great-great grandfather. I also learned that at one point he was an undertaker. I’ve seen his citizenship papers; they are dated 1866. As being Jewish in America goes, that’s older than most, predating most immigration. So through my grandfather I’m fourth generation American. Through my other grandparents I’m third and second generation.

Oh, what the Hell 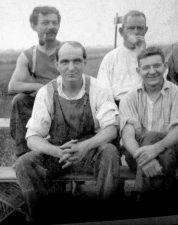 My great-grandfather is sitting on the front right in front of his father. I’ve been to both their gravesites.

I never saw my great-grandfather look like that. My mother hadn’t either, and she’d grown up in the same house with him. I just knew him as old and quiet. Mom I guess knew him as young and quiet. I think some of the tools I have were probably his. Because my grandfather and mother were only children, both my grandfather’s tools and his father’s tolls ended up with my father and in turn with me, but I don’t know which one comes from when or whom.

I haven’t played my piano in ages and I had it tuned today as a birthday present. I’ll play it tomorrow. To my knowledge, it’s a few years older than these pictures. We got it in 1970.