A Star is Born Experience: New Wine in an Old Bottle

We went to see A Star is Born on its opening weekend and my summary description of the film is that several stars were born in the making of that film.

First of all, there’s Bradley Cooper, an actor who has only hit my radar screen three times, for Silver Linings Playbook in 2012,  American Hustle in 2013, and  American Sniper in 2014.  All three films earned him Oscar nominations.  Three nominations in three years for three rather dramatically different roles makes Cooper a hot property. (He’s also made some stinkers along the way. Nobody’s perfect.)

This burst of creativity followed his 2011 performance in Limitless, a film about a struggling writer who takes a pill that turns him into a mental giant. Cooper may have taken home some free samples of that pill, because his career has been on fire since then.

What Cooper has not given us, until now, are any hints about his other talents. He co-wrote, produced, directed and stars in A Star is Born, a feat successfully accomplished by only a very few film makers. He also spent 18 months turning himself into a credible country-rock singer, performing all of the film’s concert footage before live audiences at actual concert venues. That’s pretty amazing for anyone who has never stepped into that role before.

What’s even more amazing is the performance of the first-time actress who played Ally, the soon-to-be-discovered raw talent who becomes the star that is being born in the fourth remake of this tired old Hollywood chestnut.  As Ally, this newcomer completely captivates the screen – and the viewer – in every shot she’s in with a raw honesty that comes from the gut, not the head.

Ally’s character is enhanced, and the actor’ performance is therefore aided by Cooper’s clever camera work. Actors have an almost undeniable compulsion to look directly into the camera’s eye whenever possible. This is the essence of scene stealing; whenever an actor looks directly into the camera, it fixes the audience’s attention on the actor.  It’s one of those stop time moments that tells the viewer to pay attention to this character.

One of the classic examples of this technique is at the beginning of Steven Soderbergh’s Erin Brockovich, Julia  Roberts’ Academy Award winning bio-pic of the consumer right’s advocate’s struggle against the Pacific Gas and Electric Company pollution problems.  There’s a scene in which Roberts is eating at a diner with her kids. The waitress serving them was, in fact, the real Erin Brockovich, which is made clear to the audience with a one second hold on the waitress looking directly into the camera.  The same technique was used in Tom Cruise’ s second Jack Reacher film, Never Go Back, in which the author of the Jack Reacher novels, Lee Child, plays the role of a TSA agent who is checking Cruise through the checkpoint.

What Cooper does differently, however, is that he waits for the final shot of  the film before allowing Ally to look directly into the camera. In that last parting shot, we see the star being born.

The star, of course, is Stefani Germanotta, also known as Lady Gaga…but I didn’t realize who she was until the very end of the film, when the credits started to roll.

I knew, of course, that Lady Gaga was the star of the film. I even passed a billboard with her name on it on my way into the theater but, from the very first scene in which Gaga appears, I simply forgot that I was looking at Lady Gaga. Working mostly without makeup (except to cover up her tattoos), Lady Gaga gives us an raw, honest impression of what  it is like to claw your way from obscurity to stardom.

That’s the reason for  my five star review:  I honestly forgot that Lady Gaga was Lady Gaga and not some unknown young actress scoring the break of a lifetime on the basis of a chance encounter. That’s the Hollywood myth part.  The reality is that, by her own admission, Lady Gaga wanted to be an actress, but fell back on singing because no one would give her a shot at acting…on account of her Italian nose. (Barbra Streisand went though the same exact scenario, wanting to be an actress but being forced to rely on her singing skills to break into show business. Like Lady Gaga, Streisand attributes her difficulties to her Jewish nose.)

I actually sat in the audience thinking that this young, unknown actress had quite a career ahead of her. That’s a testament to Gaga’s ability as an actress.  She can play a lot of different roles, including herself, which is a character much closer to the reality of Steffie Germanotta than the fantasy that is Lady Gaga. Cooper helps her along but no director can work wonders without the raw talent, and Lady Gaga has that in spades.

A Star is Born is the perfect starring vehicle for Lady Gaga because, without the Bradley Cooper character to help her along the way, Ally’s story is Lady Gaga’s story, a story of repeated rejections that forced Gaga into the larger than life character she now plays in real life, backed up by a monstrous talent and an incredible voice matched to an amazing delivery. 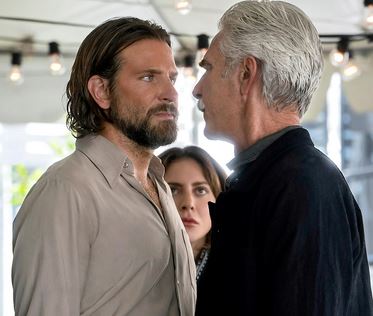 A much deserved honorable mention goes out to Hollywood veteran Sam Elliot, one of the best character actors of our time, for a heartfelt role as Bradley Cooper’s older brother, personal manager, and role model. (Cooper spent months working with a voice coach so that he could deliver a convincing simulacrum of Elliot’s gravel-toned Western accent.)

Elliot began his film career as “Card Player #2” in 1969’s Butch Cassidy and the Sundance Kid,  and then spent the next 18 years in series and made-for-TV films.  In 1989, he co-starred with Patrick Swayze in Road House.  In 1993,  he played the legendary Union cavalry general John Buford in Gettysburg.  He played Virgil Earp  against Kurt Russell’s Wyatt in 1993’s Tombstone.  In 1997, he played  Captain Bucky O’Neil in The Rough Riders. In 2002, he played Sgt. Major Basil Plumley (sorry, but that was the character’s real name) against Mel Gibson’s Lt. Col. Hal Moore in We Were Soldiers, one of the best films ever made about Vietnam.

In each of these roles, Elliott brings an intense authenticity to his roles and, in each case, his characterizations are pivotal roles in the films in which he has appeared.  In all honesty, his role in A Star is Born is more subdued and less  charismatic but he’s long overdue for an Oscar, so expect him to get the nomination and probably the nod as well.

There are other surprises in the cast list.  Dave Chappelle plays a performer who has stepped back from the spotlight to work on his own life, a role that echoes Chappelle’s own famous retreat from fame.  Drena De Niro plays Chappelle’s wife. Her son, Leandro De Niro Rodriguez,  plays Chappelle’s son. Andrew Dice Clay, of all people, turns in a perfect performance as Ally’s Italian limo driving father. The rubber faced scene stealer Barry Shabaka Henley (Terry Drake on Bosch) has a cameo as Little Feet,  another limo driver. Veteran character actor Ron Rifkin (L.A. Confidential, The Negotiator) turns in an important cameo as a substance abuse counselor.

Cooper’s script takes on some serious issues, including alcoholism, substance abuse, depression, the insanity of stardom (especially in the music business, where performers have to interact with fans on a more regular basis than actors do), and the insane cruelty of fame, but he does it without preaching.  In another real-life complication, Bradley Cooper is himself a recovering alcoholic, so he brings that perspective to his character’s struggle with addiction.

The film’s realistic feeling is enhanced by the number of cameos from real-life bands, musicians and singer-songwriters, all of whom appear to have collaborated to make the final cut more realistic.

A Star is Born is going to be a contender in several Oscar categories, including best actress, best actor, at least one supporting actor nomination, best director and, of course, best film. It will almost certainly win several of those categories.

As part of my due diligence, we rented the 1976 Barbra Streisand – Kris Kristofferson version, in which Kristofferson reportedly sang badly on purpose to portray the has been star on the way down, getting worse each time he sings. Streisand played it the other way, starting off singing less effectively (with that amazing voice) and getting better as the film progressed. We turned it off halfway through.  The Gaga – Cooper version is the hands-down winner.

Cooper and Lady Gaga may never make another film together, but I hope they do, as long as it isn’t a sequel.  A Star is Born II would be an insult to this film’s sincerity and to the patience of the audience.