Hello? Hello? You-all still celebrating Thanksgiving? Hung over from Thanksgiving? Ours was back in October, and at any rate is not the blow-out you guys celebrate.

My day: Got out of the house early and hit the insurance office (5 blocks away, like everything in town) just after opening time on a rainy Monday morning. As I’d hoped, I could just stroll in – four clerks, one other customer. This is for the car and produces a sticker for my license plate. Last year’s sticker had half peeled off at some point, showing the previous year’s #. But nobody noticed.

Awaiting my new driver’s license to arrive in the mail. Had to get my medical person to fill out and mail a form for me, now that I’m over 80. Aced the eye chart with the new eye, and the old eye was adequate – next week it will be 20-20 too. All set for another year of driving…tho I don’t do that much any more – getting dicey/icy to drive up into the mountains for touring, and going the other direction is to towns & cities where I can’t do any recreational shopping at the thrift stores any more, sob. But I’ll take my younger daughter later this week, when it stops raining, to go look at eagles: at this season they congregate at a place down-river to feast on salmon.

After insurance, off to the grocery store. If I’d got there 2 hours earlier, I could have had it mostly to myself (Old People’s Hour), but getting up and out for 7, in these dark days, is something I’ve only managed once. No matter – at 9.30, it was still sparsely populated enough that I strolled up the empty down aisles & vice versa in good conscience. Fruit, cold-brew coffee (for late afternoons), salad stuff, eggs, cheese, lotsa cat food and a box of litter, and some of their ready-made meals left over from their weekend ham & turkey nights. For other meals, I have half a dozen assorted to be delivered on Tuesday from an entrepreneur down the highway. A good business, I’d think, for this time of plague.

Mid-afternoon a friend messaged me to say that she’d just made 26 cabbage rolls and offering to leave some on my front step. Big fat ones, they are. I’ll have to think up something by way of exchange later this week. An opportunity to make something sweet, have a bit and then dispose of most of it…

Otherwise a boring day, but I managed to do the storage room. Back east it was a spare bedroom. Here, thank goodness, a large closet-sized space, the former bathroom. When the surface clutter was cleared, the underlying organization was still there, so not as bad a job as it it first looked when you opened the door. (Anyone else here remember Fibber McGee and his closet?)

Only other excitement was temporarily losing one of my hearing aids and panicking – until I found it tangled in my hair. Whew. Now using it to listen to Maddow. 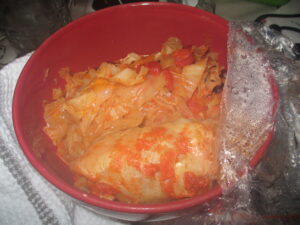