From the Department of WTF 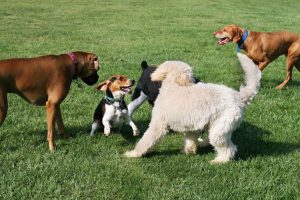 “It’s a neighborhood battle that’s bad to the bone.

Some residents in a wealthy Washington, DC, suburb want to ban barking at a local dog park — and politically connected pooch lovers sure aren’t yappy.

The neighbors in Chevy Chase Village in Maryland — which include a Trump-appointed official and a former state attorney general — are duking it out over a patch of land that was turned into an off-leash hotspot, with some neighbors calling it a noisy headache, according to The Washington Post.”

Are they barking at the moon?

Or, are they barking up the wrong tree?

When they  post the “NO BARKING ALLOWED ” or “BARKING PROHIBITED” sign, will they demand that all dogs read and accept the terms of use, which would require the dogs to read and bark English?