A Facebook friend and I post pix and trade comments & daydreams re gingerbread follies. We’re both very into turrets (no phallic jokes, please.) Alas, she lives in an apartment and I in a white rectangular box that resembles a slightly oversized and less efficiently laid-out mobile home. At least I have a rococo yard (a jumble of flowers and a naked-man statue and a chain-saw carved dragon and a ritual circle and a cobblestone firepit area and two cat runs and a gazebo and…).

I live in the old central area of town, and many other of the houses are interesting, idiocyncratic, or at least period. Despite the general air of decay, I find them preferable to the neat identical (expensive!) houses of the outlying suburbs, with their surgical landscaping.

Okay, I recently visited one of these and once past the off-putting front I felt something of a pang – really wonderful kitchen and cozy LR with fire (fake?), and the tiny backyard was private and cozy, and probably the upkeep took a hour a week, as compared to the hour+ a day, and never catching up, that I have inflicted upon myself with a big yard, the lawn of which I smothered and turned into a little park. (The time saved in this suburban backyard I visited was probably needed to keep up with the house interior.)

A pity that the construction biz figured out mass-production. When I was a kid, you wanted a house you hired a “contractor”, who built you the one-of-a-kind house himself (he lived in one down the street) – and these were affordable (working-class neighborhood).

Guy who drops off my ready-made meals when he brings his own to town is putting his house up for sale. Half a million.  Squashed in a small faux neighborhood of identicals, but interior (pix on line) fantastic – 4 beds, 3 baths, state of the art kitchen (which he evidently doesn’t use), “high-end” furniture he’ll throw in (not the dog), pretty snazzy, and a postage-stamp back yard facing the highway that he calls “spacious” (the yard, not the highway). If I had half a mil., I wouldn’t use it for that. 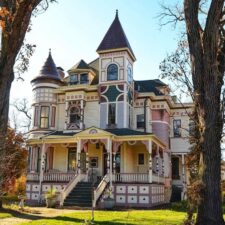