Trump denies knowing any of the people in this photo taken at a recent White House dinner meeting: 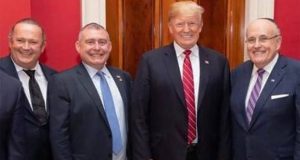 The two gentlemen on the left were arrested trying to flee the country. They are the Giuliani assouciates being held on illegal campaign finance charges. 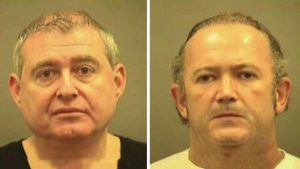 …and like his predecessor, Michael Cohen,  Rudy Giuliani is about to be thrown under the bus….

Rudy Giuliani is under investigation, and likely will be indicted and charged with violations of the Logan Act:

The Logan Act (1 Stat. 613, 18 U.S.C. § 953, enacted January 30, 1799) is a United States federal law that criminalizes negotiation by unauthorized persons with foreign governments having a dispute with the United States. The intent behind the Act is to prevent unauthorized negotiations from undermining the government’s position.[2] The Act was passed following George Logan’s unauthorized negotiations with France in 1798, and was signed into law by President John Adams on January 30, 1799. The Act was amended in 1994, changing the penalty for violation from “fined $5,000” to “fined under this title”; this appears to be the only amendment to the Act.[2] Violation of the Logan Act is a felony. —–Wikipedia