The Yankees were leading by two runs with two outs and a 1-0 count on pinch-hitter Frank Kellert, Robinson broke for home against Yanks left-hander Whitey Ford.

Ford went through with his over-the-head windup delivery and made a precise throw home to Berra, who was ready to lay the tag on Robinson, who slid in feet first. Robinson was quickly called safe by home-plate umpire Bill Summers, and Berra, and the vast majority of the 64,00 home fans in attendance at Yankee Stadium that day, were incensed.

Berra never quite let it go (though the Yankees won that game, 6-5, the Dodgers won the World Series in seven games). In fact, according to Politico, once after President Barack Obama mentioned Robinson’s famous steal of home in 2010, Berra sent the president a signed photo of the play.

A fact is something that’s indisputable, based on empirical research and quantifiable measures. Facts go beyond theories. They’re proven through calculation and experience, or they’re something that definitively occurred in the past. Truth is entirely different; it may include fact, but it can also include belief.

If the ‘truth’ lies in a closely held belief, facts are irrelevant and simply don’t matter.

There are millions of American voters who are enthralled with conspiracy theories and political lies such that American Democracy is facing its greatest existential threat from within.

The questions regarding resolution of the issues seem persistent and intractable. Among these questions is a salient interrogatory that seems to be close to, or at, the heart of the matter:

If it is true that you can’t overcome an emotional connection with a rational argument, where do we go from there?

To this day, you would be hard pressed to find a Yankee fan who would relent and accept the fact of the umpire’s call at the plate.

Most Yankee fans believed Robinson to be out. Some would insist that he was out by a mile…

As far as I’m concerned, Robinson didn’t beat the throw…

The truth is, he beat the tag.

But then, I’ve been a fan of Jackie Robinson and the Dodgers all of my life…. 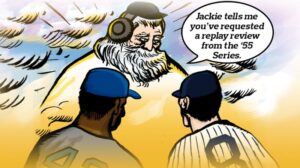