When history books are written about now, yesterday will be in them.

When we woke up, we expected the reasons that January 6 would be important would be, firstly, that the Senate went Democratic and, secondly, that the election was certified by Congress. The first wasn’t the biggest news, though in the long run it could be, and the second actually happened today, January 7. The electoral vote was confirmed by Congress, 93-7 by the Senate, though in the House, 122 voted for further evaluation of voting. Among the 93, strongly among the 93, were Senators McConnell and Graham. This was a step too far. Today Sen. Schumer, the editorial board of the Washington Post, and the head of the American Association of Manufacturers, who is a former high-ranking Republican operative, all called for the removal of President Trump from office. The Cabinet has apparently discussed invoking the 25th Amendment, though I don’t know where they are in that decision, and White House staffers are leaving in droves.

In 2011, I was involved in a loudspeaker demonstration on the floor of the Capitol Rotunda. It’s a difficult acoustic environment and some events are held there with speeches, so intelligibility is an issue. I represented a product that addressed that. What I can tell you about that visit, which is where I took the photograph above, is that security was unbelievable. We were met at a site several blocks off site, the loudspeakers and electronics were inspected, and they brought the product to the floor. We had to be screened ahead of time to get access. While we were working on the floor, when I needed to go to the bathroom I needed a police escort. Bathrooms were an elevator ride down. You have no idea how extensive the offices under the Capitol are. It’s like another city down there.

Having gone through that security, I was doubly surprised at how easily it was breached yesterday. My mother, watching on television, and who has lived in the greater Washington, DC area for more than half a century, commented that it looked like the police didn’t want to hurt their friends.

Which brings up another point that has been talked about a great deal since the breach: If the protestors responsible for the breach had been Black, they’d all be arrested or dead.

And now I’ll say something I never expected to say in my lifetime:

How the police have treated Black protesters would have been more appropriate yesterday than how they treated those White protestors. They are terrorists and traitors.

But that treatment isn’t just about the protesters being White, it’s apparently also about them being Trump supporters. Trump has a lot of support in the Capitol Police.

Have a look yourself:
https://www.instagram.com/p/CJuIzd_JY2R/?igshid=1xrhzue353fxb

So who were these Trump supporters? According to the Washington Post, the FBI is looking for help identifying them from news photos of the event. But if you want to know overall who they are, here’s a clue: 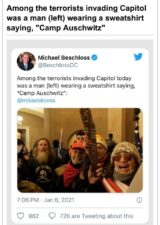 And that’s before we get to the Confederate flags they put up in the Capitol with their Trump flags, replacing American flags with both, which should tell you damned near everything.

The FBI has said for years that we have a problem with extreme right-wingers infiltrating police forces. I think perhaps the Biden administration will be a lot more supportive of the FBI’s efforts in this direction than the Trump administration was. This may start to feel like McCarthyism to the police but they brought it on themselves. And this effort will be critical to the country.

What’s next? I’m not confident in my crystal ball on this. There are a lot of Americans who were supportive of this treasonous action and would support further action along these lines. However, that will be more difficult without a supporter in the White House. I’d be worried about how far the Trump Traitors could go, particularly with friendly police around the country, but they don’t have the support of the military, either party’s establishment, or Corporate America.

At this point I can’t expect not to be surprised.