“An apex predator, also known as an alpha predator or top predator, is a predator at the top of a food chain, without natural predators.”

Make no mistake, McConnell wants the Ginsburg seat on the Supreme Court.

By announcing that the Trump nominee will receive a vote on the floor of the Senate despite contrary Senate precedent, he’s already begun the process toward acquiring it…

With the mysterious cooperation of Chuck Schumer, he has managed to ‘devour’ the federal judiciary by ‘packing’ the lower courts with ‘conservative’ Trump nominees and is continuing to do so…

Now, he has a last ditch opportunity to capture the Supreme Court in an election cycle that he knows cannot turn out well for Republicans across the board.

While the loss of the Republican majority in the Senate is not inevitable, it is a distinct possibility.

McConnell is a consummate political opportunist and predator. He will wait for the most propitious moment to pounce on the vacancy created by the passing of Justice Ginsburg. 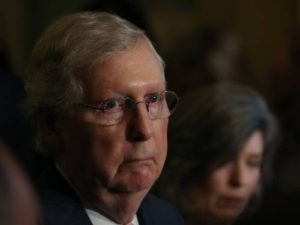 He won’t push for a Senate floor vote on the Trump nominee until after the election.

He will attempt to push the nomination through the lame duck session between November 3, 2020 and January 20, 2021.

He will appeal to Republicans who have been defeated or who are retiring by reminding them that that will be their last best chance to secure a legacy of ‘conservative’ rulings for the next generation or two.

And, they will buy it…

The constitutional fight to block this strategic move will be among the myriad of election cases to be decided by the federal courts that will almost certainly come.

Attempts to overturn and disrupt the election returns and results will precipitate a cascade of post election litigation. The Trump, McConnell, and Barr cabal will not go quietly.

If McConnell succeeds in his quest for a 6-3 conservative majority. The Democrats will have no choice but to pursue the ‘nuclear option’ of ‘packing the Court’ if they win control of the Senate.

It may well become the only recourse available to those who wish to defang and vanquish the ‘apex predator’.

The problem will become keeping him that way…