I’m in the District. For those not familiar with the term, it’s local parlance for Washington, DC, as New Yorkers know NYC as “the city.” I’m here for Valentines Day, taking my wife out of town to a hotel that treats us very well, welcomes our dog, and contains a restaurant with way better food than I can get in greater Binghamton, NY. For those of you seriously conversant with District geography, I’m staying around the block from Ford’s Theater. I know that because I found it walking my dog. Here’s what it looked like a few minutes ago: 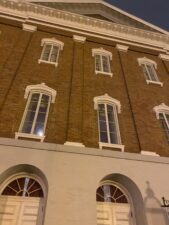 My family moved to Suburban Maryland when I was fifteen years old. I lived in the area, a combination of Maryland and the District itself, until I was just short of forty-two, and I continue to work a lot in the area when COVID allows me to make sales calls. I have seen the United States Capitol a whole lot of times. I’ve even done a speaker demo in it. I’ve had a tour (with Jonah, my mother, and my stepfather) of the Capitol with a Congressional staffer, I don’t remember if it was with my Representative at the time or Senator. I saw it for the first time as a visitor with my family when I was five or six years old.

So we’re driving toward the hotel, coming in from the BW Parkway to Rt. 50 W, which turns into NY Ave and eventually gets to the hotel neighborhood, just south of Chinatown. At one point we cross North Capitol Street. As you might guess from the name, North Capitol Street goes due north from the Capitol building. So I saw it, just for a second or two. It was blocks away but it’s big and at night it’s lit up. It’s gorgeous. When I lived around here – and even when I come back to work and am taking someone around I work with who has never been here – I drove my visitors around the District at night because the monuments look really cool lit up.

Seeing it was jarring. I’ve never had a negative reaction to it before. It means something different now. It used to inspire confidence. I didn’t always agree with what happened in there, God Knows I didn’t, but it still housed the most consequential legislature in the world.

Now it’s been violated. Now some woman abuser walked through its halls saying Nannnnceeee, almost Come out, come out, wherever you are, which in this case happens before abuse. To our House Speaker. Seven deaths. Two Capitol Policemen have committed suicide in the aftermath. Roughly 150 police officers injured. Our key legislators, including the Vice President, were lucky to escape with their lives. No one can legitimately claim to support The Police when they approved of what was done to the Capitol Police.

But the violation is not what’s worst. What’s worst is how many Congressmen and women, Senators, and millions and millions of Americans are OK with this. They’re fine with no consequences for this. Four guys at Benghazi is national betrayal but invading the United States Capitol is not.

It’s not just that the Capitol has been violated, it’s that it still isn’t safe, or isn’t safe any more. From Americans. This is, and I mean this very nearly literally, sacrilegious. It is pissing in America’s holy temple. It is saying that what makes America great has no value. We aren’t like other countries. We aren’t ethnically identifiable. We became a country because our government was different.

Now it’s just the Reichstag. It’s just something that can be burned with millions and millions of Americans just not giving a shit. Not the majority, thank God, but way more than I would have thought possible. This will be confirmed in a really horrible way if Trump is acquitted. A man can cause this and betray his oath of office deeply and suffer no consequences for doing so.

And there are no excuses. Part of our responsibility as citizens is to look for the truth about our country, by which I don’t mean find something we’re comfortable with and go with it. We know the election wasn’t stolen. We know it was carefully monitored. We know that Republican official after Republican official, both state officers and judges, have consistently found that there was no significant voter fraud. Embracing a comfortable fairy tale at a cost of seven dead and 150 police officers injured is not acceptable. They all have the means to look into it.

For God’s sake, if you’re going to live here, learn to be an American. Immigrants understand this. Why don’t QAnon believers and Trump followers?