The Origin and History of The Big Lie

“A lie can travel around the world and back again while the truth is lacing up its boots.”—Mark Twain.

“The big lie (German: große Lüge) is a gross distortion or misrepresentation of the truth, used especially as a propaganda
technique.[1][2] The German expression was coined by Adolf Hitler, when he dictated his 1925 book Mein Kampf, to describe the use of a lie so colossal that no one would believe that someone “could have the impudence to distort the truth so infamously.” Hitler claimed that the technique had been used by Jews to blame Germany’s loss in World War I on German general Erich Ludendorff, who was a prominent nationalist political leader in the Weimar Republic.

According to historian Jeffrey Herf, the Nazis used the idea of the original big lie to turn sentiment against Jews and justify the Holocaust. Herf maintains that Joseph Goebbels and the Nazi Party actually used the big lie technique that they described – and that they used it to turn long-standing antisemitism in Europe into mass murder. Herf further argues that the Nazis’ big lie was their depiction of Germany as an innocent, besieged land striking back at “international Jewry“, which the Nazis blamed for starting World War I. Nazi propaganda repeatedly claimed that Jews held power behind the scenes in Britain, Russia, and the United States. It further spread claims that the Jews had begun a war of extermination against Germany, and used these to assert that Germany had a right to annihilate the Jews in self-defense.

In the 21st century, the term has been applied to attempts to overturn the result of the 2020 U.S. presidential election by Donald Trump and his allies, specifically the false claim that the election was stolen through massive voter and electoral fraud. The scale of the claims resulted in Trump supporters attacking the U.S. Capitol.[3][4] Later reports indicate that Trump knew he had lost the election while promoting the narrative.

Scholars say that constant repetition in many different media is necessary for the success of the big lie technique, as is a psychological motivation for the audience to believe the extreme assertions.”

Why has Donald Trump gotten away with and succeeded while being a compulsive and habitual abject liar? 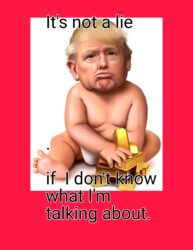 A research study published in Science Magazine, specifically studied how “true” and “false” news is spread online. Before this study, most research was either anecdotal or studied only one particular aspect of this topic, such as how rumors are propagated.

The researchers at MIT analyzed 126,000 stories tweeted by three million people over 11 years on Twitter to see if there are different patterns in how true news and false news are disseminated. Six independent fact checking organizations, with a 95 percent to 98 percent agreement on the classifications, verified the veracity of the stories.

They purposely avoided using the term “fake news” as they said this term has been misused, primarily by politicians, and has “lost all connection to the actual veracity of information presented.” Rather, the term “true” or “false” news was used.

The researchers defined “news” as “any story or claim with an assertion in it and a rumor as the social phenomena of a news story or claim spreading or diffusing through the Twitter network.”

When the researchers analyzed how true and false rumors are spread on Twitter, they found falsehood diffused significantly farther, faster, deeper, and more broadly than truth in all categories of information. In fact, falsehoods were 70 percent more likely to be retweeted than the truth. Falsehood also reached more people than the truth thanks in part to peer-to-peer sharing, rather than tweets being broadcasted or shared by bots. Within the types of false news, political news traveled deeply and more broadly.

Why is false news more likely to be shared?

False news was found to be more “novel” than true news and false stories have stronger emotional ties, conjuring fear, disgust and surprise in replies.

While false news may be more ‘shocking’ than true news, it seems clear that lies are more easily and more effectively disseminated than the truth because lies resonate as more reflective of shared human behavior and the human condition re human instincts and reflexes.

Read the full piece at:

Trump has exploited this weakness in the American psyche to perfection and taken his capacity to lie to the level of an art form.

He has built his life, lifestyle, and career on lies and falsehoods to the detriment of the very existence of America as the world’s foremost experiment in democratic self governance…