The Sum of Their Fears

“You may take the most gallant sailor, the most intrepid airman or the most audacious soldier, put them at a table together—what do you get? The sum of their fears.”

The idea that the stench of Racism is somehow less pungent because it is no longer socially acceptable to be openly and overtly racist is antithetical to the idea that systemic and institutional racism are a societal plague and a blot on the nation’s character.

Euphemisms and platitudes employed in the place of the epithets and invectives that were in vogue and acceptable in times past have not made the racism which is baked into the political, social, and cultural DNA of this country less hurtful, harmful, damaging, destructive, and divisive…

Racism is the ambience of the national environment. Racism is as ubiquitous and prolific as the air we breathe. It permeates every aspect of the lives and livelihoods of every black man, woman, and child in this country…

Racism is everywhere. The effect and impact of racism is inescapable…

The fact that White folks are loathe to wear their racism on their sleeves or shout it from their rooftops for fear of being stigmatized and ostracized by their families, friends, and neighbors is not evidence of the the notion that racism is waning or receding from the body politik.

It simply means that the White folks who are caught out and called out for their open and overt racism are less adroit at ambiguity, avoidance and hypocritical denial….

Both Bitey and Koshersalaami have questioned and pondered the veracity and validity of my assertion that most of the white people in this country are racists. Neither are able to state conclusively or with conviction that my determination is wrong. Both have left the question open and open ended. Both seem to deal with the matter with some trepidation. Neither has come to the table prepared to address the very real possibility and prospect that the contention is accurate and correct.

The question that looms like the proverbial elephant in the room is:

What if Ron’s right? What if most of the white people in America would allow this country to slip back into the darkness of Jim Crow segregation and Constitutional apartheid?

The fight to save, preserve and defend the American Democratic Republic is inextricably linked to the social and political fate of American nonwhite populations.

The majority of white folks continue to remain indifferent or ignore this salient fact of American political and social life. They do so at the risk of losing the democracy to the forces of autocracy and authoritarianism….

The events of January 6th are clear and convincing evidence of the fact that this country cannot and will not survive a second coming…. 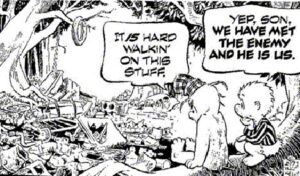