Thomas is Clueless re Appointment to Supreme Court

In recounting the process that set him up to become one of most consequential conservative voices on the bench, Clarence Thomas said that he had “no idea why or how” he was nominated to the Supreme Court in 1991.

The book, “Created Equal: Clarence Thomas in His Own Words,” was coedited by Michael Pack and Mark Paoletta, Regnery Publishing (June 21, 2022)…

Thomas admits that he’s clueless re his appointment to the Supreme Court.

This is consistent with, and fairly well explains, everything he’s done since being sworn in as the replacement for Associate Justice Thurgood Marshall. 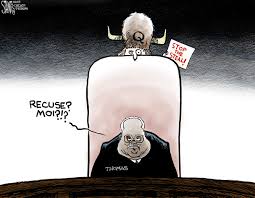