The Coronavirus Pandemic has brought us to a watershed moment in the history of the fight against racial bigotry and social injustice.

The economic, social, and political inequities and disparities have been laid bare for all to witness in a manner that simply cannot be denied.

The intersection of COVID19 and a Presidential Election has presented a unique and singular opportunity to loosen the grip that racism has had on this country and this society for centuries.

I have come to the conclusion, perhaps the realization, that the back of racism and racist ideologies won’t be broken by the persuasiveness of arguments on social conciousness or moral imperatives, but on the strength of arguments that are predicated on economic necessity and financial expedience.

An ideology couched in economic justice and egalitarian democracy is the way out of the morass of the racial bigotry upon which this society was built.

Restoration and strengthening of the values and principles of ‘equal justice under law’ within the context and framework of the Jeffersonian declaration that we are a nation of equals provides all the guidance necessary to achieve a more perfect union.

As long as capitalism is the driving force in the American economic engine, the role of the government must be to reign in the competitive impulses toward the excesses and extremes engendered by the capitalist economic construct.

The richest 1% of families controlled a record-high 38.6% of the country’s wealth in 2016, according to a recent Federal Reserve report. That’s nearly twice as much as the bottom 90%, which has seen its slice of the pie continue to shrink. 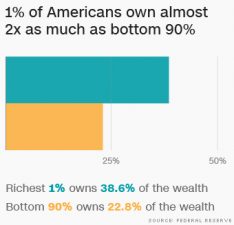 The Michigan demonstrators and others of their ilk are not armed protesters inside the Michigan State Capitol, they are armed insurrectionists. 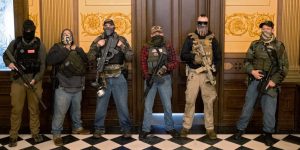 In case you haven’t noticed, these are angry and disillusioned white folks who are trapped in the bottom 90% of the economic pyramid that contains the essence of the disparities, inequities, and injustices wrought by increasingly unregulated capitalist and so-called free market impulses.

The zero-sum, winner-take-all, mentality of free-market capitalists has all but eroded the principles of egalitarian democracy out of existence….So much so that America has become a society and system of financial and economic winners and losers…

If Trump were to wake up one morning and decide to ‘change the subject’ in an ill-conceived manner, such as an authorization of a 2nd Amendment solution to his inevitable electoral difficulties, we’ll have the beginnings of the much heralded ‘civil war’ this crowd of anarchical wingnuts, conspiracy theory lunatics, and neonazi white nationalists have been itching to initiate….

Elizabeth Warren gets this, which is why, of all the candidates that were in the Democratic field, Wall Street feared her the most…

That brings me to the point of this post.

Black people have brought Joe Biden to the brink of victory in the upcoming presidential election.
Because he prematurely committed himself to choosing a woman, the legitimate expectation is that he will choose a black woman to be his running mate

While such a selection is attractive and intriguing, it would be the wrong thing to do at this moment…

A black face on the Democratic ticket would give the Trump campaign the target they so desperately need because all they have left to run on is the racist phobias and foibles that put Trump in the White House in 2016.

Trump will run a racist campaign against the Obama legacy and any person of color Biden might choose to be a running mate.

At the moment, the apparent ‘choice’ for Biden seems to be Kamala Harris. Stacy Abrams doesn’t quite yet have sufficient credentials or national profile, even as she seems to be a Democratic ‘rising star’.

Biden most likely will be a one term president, a table setter for a government controlled by the Democratic party for the foreseeable future…He’s simply to old and frail politically to go beyond that.

While she may have the intellectual skills and the essential credentials necessary to win the debates, Kamala Harris lacks the world view, experience, preparation, temperament, economic insight, and personal narrative to lead the government and the people of this Constitutional Democratic Republic into the inevitable ideological battle against the enemies within….

In other words, she’s not on Elizabeth Warren’s level re the necessary experience, background, preparation, and insight to mount a successful attack against the economic and financial forces arrayed against racial equality and social justice…

I have said in countless posts, in as many ways as I could muster, that the job of achieving a just society in this country, falls on the shoulders of the white people who made it unjust in the first place…

White people can be led away from racism and bigotry, but not by black or brown people.

Obama and Harris are products of Dr. King’s movement.

However, neither are, or can be, catalysts for the movement of white people toward the wholesale change that must take place within and among them.

In my view, only other white people can lead the way for the majority of the white population in this country…

This most certainly will not happen by dint of the validity and veracity of the persuasiveness of arguments for social justice or moral imperative.

White folks like Warren can, and should, make the case that white folks will more readily accept and digest because the argument is coming from one of them…

I believe that only then will white people put an end to their fear of black reprisals for centuries of slavery, segregation, and second class citizenship,

I believe that, only then will white people put an end to their fear of the idea that ‘all men are created equal’.

I believe that, only then will white people come to accept and live by  the ‘self-evident truth’ that we’re all in this together…..

I also believe that it is not likely to happen now….

What must happen now is:

So, one of my questions is this:

Can we achieve racial and social justice without a black face on the poster?